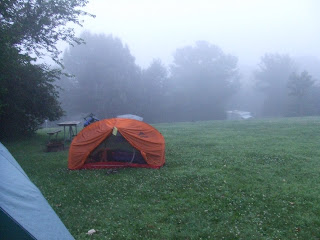 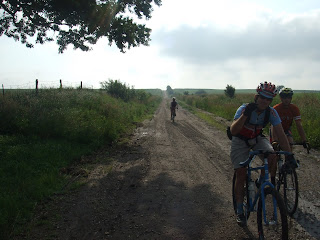 <=== Matt Wills gives me the high sign after coming off the first B Maintenance section. Jeff Bonsall is to the right here with Michael Beck following. 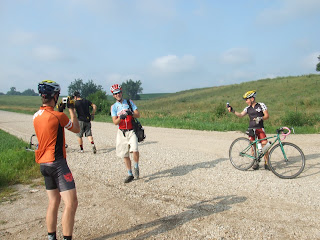 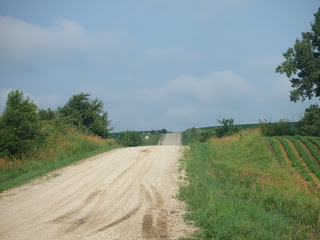 <=== The roads got increasingly hillier as the day wore on. 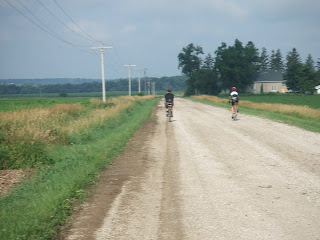 <=== On a flat section going into Traer for the first time. A familiar sight for the rest of us that ate Jason and MG's dust all day! Those guys are animals!

The day dawned foggy and humid. We slowly got things together, enjoyed some bits to eat, and got dressed to go. I slid on over to the park gate to see if anyone had been there to join us. Nope! Nobody there, so I rolled back and started hinting that we should go soon. About then, Michael Beck rolled up all ready to go on a fantastic green Interloc Racing cross bike. He was over here in Iowa to visit relatives and drove over from Marshalltown for the fun. Plus one made seven and we were off by about 7:45am.

The pace was perhaps a bit quick right out of the gate, but excitement, nervousness, and the prospects of a long, fun day on a bicycle might be to blame for that. Anyway, we were rolling along real well and then we met our first B Maintenance road about ten miles in.

David, Mike, and Jeff were rolling skinnies. However; David had the only caliper brake bike, a Salsa Casseroll, and the mud didn't take to his bike too well. He had to hoof it a piece. The rest of us waited for him at the end of the B road. This is where Jason got his shot of a deer leg. It's also where the "It's all about death" thing got started, but there's more to that later.

Well, we all got back on track and rolled the hills down into Traer for our bit of detour. I hadn't planned on stopping at Traer, but since we all felt we needed caffeine, or eats, it was decided to pull off route for stop. Here we heard the first of 64,000 "Are you guys getting ready for RAGBRAI?" questions. That would be a common theme at all of our public stops. When we would say that we were on our own ride of a 100 miles of gravel, folks would usually become dumbfounded. Pretty awesome stuff!

As we left Traer, we went south a fair number of miles feeling alternate cool and hot patches of air. It was almost as if we were going in and out of an air conditioned building. Weird! The hills got hillier, and the day got hotter as we pressed on into south western Tama County. We saw the Mesquakie Reservations water towers and turned north towards Garwin.

Stay tuned for the next installment on the ride tomorrow.
Posted by Guitar Ted at 5:52 AM