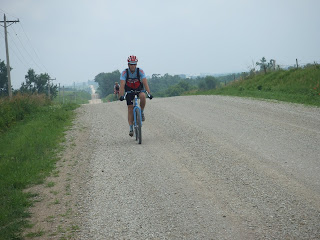 <=== Matt Wills rollin' his beautiful Soulcraft with Michael Beck, rockin' the BKB kit, coming in behind. 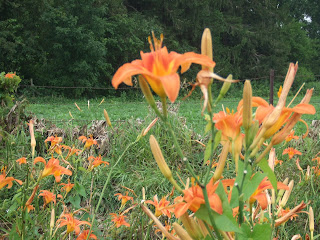 <=== The Tiger Lillies were out in full force all along the course this year. 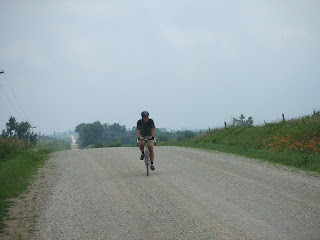 <=== The ever smiling David Pals shows his grit and determination aboard his single speed Casseroll. 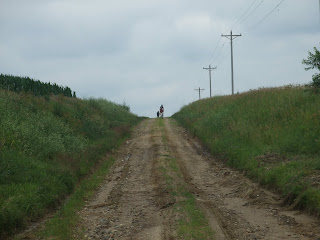 <=== Cresting the last section of muddy B road.


As we rolled towards Garwin, and a planned rest stop at the Pronto convenience store, my previous nights beer and lack of sleep kicked in and I was starting to hurt. The hamstrings were getting twitchy, so I had to back off the pace and spin more. They never locked up on me, but if you've had those "on the edge of cramping" twitches, you know what that does to your mental game. I dealt with that the rest of the ride.

Then there was Garwin. Ahhh.......the humanity! Seven cyclists roll into town like a circus sideshow and mix that up with some.....ah, shall we say.....veeeery interesting locals, and you get some high entertainment factors. I don't have the time or space to go into details, but I'll leave you with this image: An elderly lady- probably 70 plus- in a Guns n Roses t shirt. Wow!

Moving on from there we hit up our last B Road which was pretty muddy. Then it was on back towards the north to Ridge Road and the brutal climb to the water tower. I recorded a temperature of 100 degrees there on my computer. Accurate? Meh.......probably not, but it was very hot here. This necessitated a regrouping and rest for a bit at the top. For me, it caused more problems down the road.

Traer saw another round of convenience store weirdness, (a lady talking to her car for one) and then we went on for the finish. Just a few miles west of hickory Hills I got the chills. I mean I felt like I was freezing. Not good! I stopped and immediately poured water on my head and down my back and front inside my jersey. I got my temperature under control and just waited for my breathing to come back to normal. David Pals was stopped just about a tenth of a mile behind me here too. Finally, he rolled up and then Matt Wills came back looking for us. Good on Matt! He got us rolling again and we finally caught up with the rest of the group a few miles up the road where they were waiting.

It was decided that we were going to cut back to Hickory Hills on V-37 to save time. This would still get us our 100 miles and would get Jason back to meet his family who was at the campsite already waiting for him. MG and Jason shot off into the wind at breakneck speed. The rest of us got in a pace line and set off. I was in second wheel behind Matt Wills and we started off at about 18 miles an hour into the wind. the ol' drafting skills came right back and I felt comfortable, almost back to normal here for the final push. I took a pull on the downhill side of the road, and then Jeff got out and pulled some. I looked behind and we had shed off Michael and David. It was just us three and we rolled into the campsite right at six o'clock.

We sat around, drank a beer, said our goodbyes, tore down our tents, packed up, and then it started to get ugly. Rain and lightning were getting intense as we pulled out of Hickory Hills. I went to La Porte with MG, Wills, and Bonsall for pizza. Then we all went our separate ways. Another Guitar Ted Death Ride Invitational in the books.

Thanks to each one of you that attended and helped make this the best GTDRI ever, in my mind. I hope you all had as much fun as I did.

Fun that hurts, that is! I still am not recovered from that ride!
Posted by Guitar Ted at 5:48 AM