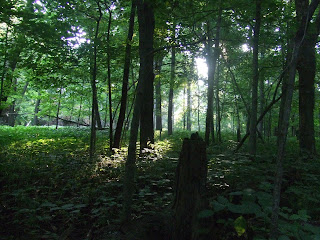 <=== Early birds get the single track!

I finally got out to the Camp this year! Only it was on the much un-used south side. I last rode this on a wintry November day with the Salsa Crew. That was a couple years back!

This day was much better. Nice temperatures, and freshly cleared single track, thanks to the hard work of the Ingawanis Mountain Bike Association boys. 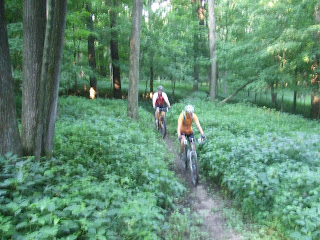 <=== The Captain and Super Saul coming up the hill.

We ran into Super Saul by chance as he was soloing out to the Camp on his Super Caliber. He joined us for a lap, watching as we swapped bikes and adjusted saddles between Capt. Bob, MTBidwell, and myself. 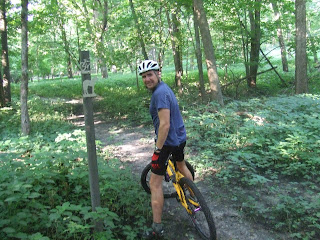 <=== MTBidwell waiting up for us aboard the Soul Cycles Dillinger. This guy is fast, fast, fast!

We dropped off Super Saul at the entrance after lap one and went back out after I swapped out for another rig. The single track is very, very promising. It needs a lot of tires to travel over it to "burn it in", but it's very fun and will be fast! 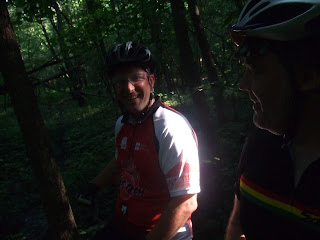 All of us had a sweet time out there. I got pretty worked over since my legs are still not 100% after the Death Ride and being sick mid-week. It still was well worth all my effort to go two laps though. I had one "auger in", where my front tire gave way in a sandy corner, but otherwise we were all good.

I must mention that the kiosk at the north end is where you need to sign in. You can now pay a daily fee, or go all out for a yearly pass. The kiosk is in a bit different place than before and it's super nice. Again, the Ingawanis Mountain Bike boys did good. It's really nice. We signed in and drove back to the south side since the Camp's north end is busy with Scout activities for now.

Bikes ridden: Soul Cycles Dillinger, Salsa Mamasita, Salsa Dos Niner, OS Bikes Blackbuck. My favorite? The Blackbuck with the Dillinger a close second, but all these bikes are killer rigs. (To be fair, my set up on the Dos was waaay off for the Camp!) The Dillinger and the Blackbuck are entirely different rigs too. Even though both were single speeds, they rode vastly different.

I'll tell ya something though, the best bike for the Camp's south side would be a Big Mama! Too bad I didn't have that rig out there! Maybe someday.......
Posted by Guitar Ted at 11:14 AM