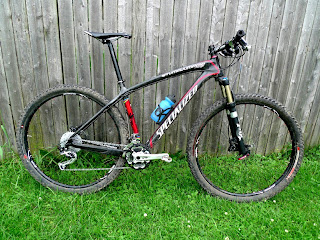 It's here! The dreaded day has come when your 9 speed stuff is "old school". Yep, that's right my dirt bikin' friends, you are off the back now with the introduction of Shimano's XT Dyna-Sys 10 speed, and SRAM's already famous XX 10 speed. SRAM is also set to soon be flooding the market with 10 speed groups all the way down to its X-7 level. New XTR is, of course, 10 speed, and so is Shimano's workhorse SLX group. Yep! You can officially start hording 9 speed stuff and call yourself a "retro-grouch" if you are into 9 speed stuff.

Of course, I jest, but to some degree, this is our perception of the new 10 speed, no? I recall when 9 speed XTR came out. Wow! There was a lot of grousing and folks murmured how they were "never going to ride 9 speed", and how Shimano was "ramming it down our throats". Hmm..........I wonder how many riders still feel that way about 9 speed in 2010? Especially now that 10 speed mtb is a reality.

And I'll be the first to admit that I have been on record as saying this 10 speed thing was/is a bad idea. Road 10 speed is none too impressive, in terms of durability and wear life. I was and still am expecting that 10 speed mtb stuff will also fall short of 9 speed in this critical area. One thing I will also admit is that the SRAM XX 10 speed stuff I have ridden is dreamy! The best shifting I have experienced in the field yet, hands down. Especially the amazing front changer. I used to hate front derailleurs until I met the XX front derailleur and shifter.

My co-writer on Twenty Nine Inches and The Cyclist, Grannygear, and I talked about the implications of 10 speed groups for off roading just the other day. He wrote this excellent post on his blog about the subject, which I highly recommend reading. I pretty much agree with his estimation that the biggest downfall of the ongoing race to add another gear to our cassette, (and in many instances, take away a chain ring too), isn't so much about lack of performance, but about cost of ownership. This stuff will be expensive to replace once the parts wear out.

In the end, the riders will decide what will happen. Will Dyna-Sys be a Dyna-thud, or a huge hit? Riders embraced 9 speed eventually, and the market fully supports it now. However; if the cost to replace an XT cassette and chain, not to mention that composite middle chain ring, is astronomical, and we find ourselves racing to replace those XT bits with Deore, or SLX just so we can afford to ride, it isn't going to go over too well. The flip side is how will those lower priced 10 speed options perform? It's going to be hard to accept an X-9 cassette that doesn't shift as well as a high dollar XX 10 speed one, even if you did save some money. Maybe that gulf between the lower end's pricing and the upper end's will just be too much to take, or maybe it won't.

At any rate, it's a new day. A 10 speed mountain bike day, and you can choose to not play along, but it isn't going away any time soon. I'll have the XT Dyna-Sys group on test on Twenty Nine Inches and locals can check it out in the flesh. Just give me a shout out here in the comments or by e-mail, and I'll be glad to let you check it out.

I am sort of looking forward to something new for my next bike build. I am torn between between 9sp and 10 sp. My main worry now is the replacement cost of the 10 sp parts. Never thought of that until reading this post. Hmm. What to do what to do......

The important thing to consider is: Will the "affordable" 10spd groups (x7, x9) be better (lighter, smoother) than the top of the line 9spd groups? We tend to tell ourselves that we need the best, however, I'll bet that the new x9 will be an improvement all the way around over the current xO group, and the new x7 won't be far behind. Sure, the finish may not have the same sparkle, but that lasts all of 30 minutes anyway. If you are going to run a front der, there is NO arguing with the new SRAM 10spd, they figured that shit out! Of course, I'll still want XX. ATMO.

Thank God for my singlespeed!

I'm with Nick. I dig my 2x9 on the 29er (and lust after both a geared drop bar 29er for adventure bikepacking,and a new SS),but with my income never going to be what it once was-now that I'm a "disabled" vet (obviously not "totally" disabled,thankfully) and having been reading the pricing expected on this new 10 speed train...I'll regress back to and hold fast to my SS,even if it is 8 years old and a 26er. Just my 2 cents.

I'm still running 8-speed on most of my bikes, 7-speed on the others. As long as I can find replacement parts (even if it's used parts from eBay), I will continue doing so.

I'm not a racer, a few ounces of weight mean nothing to me, and I can find nothing to complain about when it comes to the performance of my now-retro 8-speed XT stuff.

Having set bikes up with XX, I can tell you that I am none too impressed with the serviceability of that groupo, and I just absolutely refuse to spend that much money on bike parts I'm going to thrash and bash in the mud and dust of mountain biking.

Give me 7-speed Deore DX, any day.