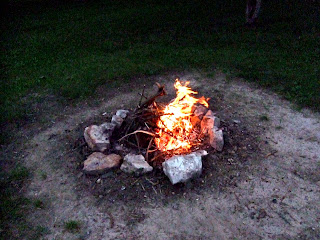 Into The Heat: The Guitar Ted Death Ride Invitational 2010 version will go down as one of the hottest rides I've been on. The Dirty Kanza 200's not withstanding, this was a brutal ride. But I'm skipping ahead, and there are things to say before I get into the burnt, crispy ending.

The ride is never a big one in terms of numbers, and I wasn't figuring on having many people on this year's version. That said, it was the lowest number of folks ever on the ride with just Jason Boucher, Jeremy Fry, and myself showing up. Don't get me wrong, I'm not complaining. It made for an intimate group and we all got along quite well. Jeremy came up in the morning, so it was just Jason and I camping out Friday night with a short visit from Captain Bob, who was in the area for a family reunion. 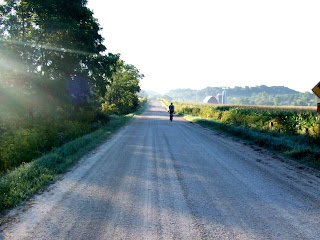 When Jeremy arrived in the morning, he said that there was a heat warning from 1pm till 7pm for the day. I didn't say much about it, but already I was thinking that this day could end in some difficulty. I knew the course, as did Jeremy, from last year, and it didn't give any quarter after the first 25 miles. We all remarked last year how a hot day would have made it so much harder. Well, we were about to find out "how much harder" it was going to get!

So the morning started without a hitch, as it was cool, and there was zero wind. None. This also bothered me actually. But for the time being it was pleasant, and the opening miles were very good with the river as a companion along the way. We could see the vapor from the morning dew burning off under the hot sun in the valleys around us. Again, something that raised a red flag in my mind, but we kept ticking off the miles, and we were making good time, actually. 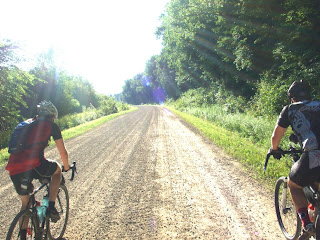 My hope was that we would get well into the brutal middle section before 1pm and beat the heat up to that part. Then we would have to slug out what we could of the rest of the route. I knew we were making good time in the morning, but I also knew we weren't going to be capable of sustaining that pace in heat with the gradients we were going to face.

By the time we were approaching Elkader, I felt we were on a good pace to get by. Maybe, just maybe we were going to get away with getting this route done. Elkader was the first re-supply chance, and I knew we were going to have to stop for awhile. I was just hoping it wouldn't be too long. 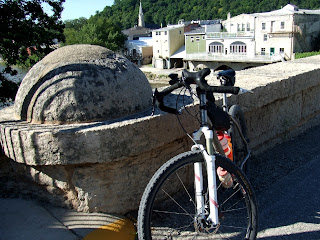 Once into Elkader, I stepped into the convenience store and thought, " Is it really that hot out already, or is it just super cold in here?" This also was a bit worrisome to my mind.

Still, we were having fun, and things were rolling along really smoothly. We had to stop a minute before leaving town so I could tighten the lid down on my Osprey's water bladder. It was leaking down my backside, which wasn't too comforting!

After Elkader, the hills kicked into gear and we would get up into the highest elevation sections of the course. It is really pretty up there and the view goes on for miles. We were running into more car traffic by this time, and every one threw up a thunderhead of dust that just hung in the air with little to no breeze to knock it off the road. I think we injested a fair helping of "Vitamin G" on this ride! 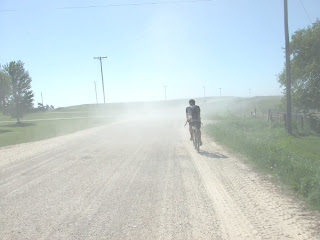 The climbs were rough, what with the heat, and little chance to escape it but the all too short down hill sections.  I was doing okay. I was gearing down, and the spinning, taking my own time approach was working well. I had a 29T inner ring with a 34T lowest rear cog, which for all intents was plenty low. I didn't ever wish for a lower gear, that's for sure.

The other thing about my bike that was working well, but I hadn't really tried out much, was the Woodchipper bar/STI shifter thing. Now, I am not a big fan of STI levers, but I was getting the shifts I wanted, and surprisingly, the brakes were more that powerful enough to slow me down. In fact, the mechanical advantage of the levers was too great, if anything. It made modulation an exercise in subtlety. That's for sure! 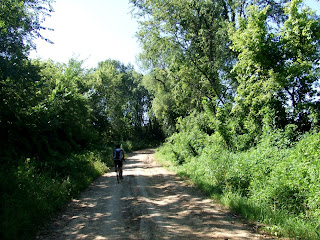 The first B Service Road was Imperial Road, which was lined with trees going up a steep hillside. It was rutted out, and even muddy in a couple of spots. A brief, but well accepted respite from the brutal sun we were beginning to bake under.

Then we popped out of the trees and back into the sun for some roller coaster like descents and climbs. Very, very steep! Still, we all rolled up these climbs, albeit in our lowest gears. It was a bit tougher in some places this time because the rocks were loose, and spinning out had to be avoided by making sure you were choosing the correct lines. It was no picnic then climbing these short steeps, which were  requiring not only muscle power, but mental sharpness. 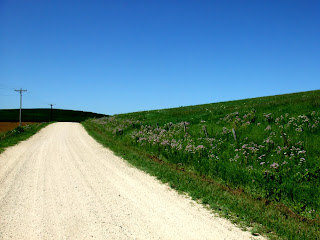 This GTDRI was typified by the brutal heat, and it also was the very best one from a standpoint of flowers. They lined the entire route, and there were more varieties than ever. Sometimes whole fields were passed that were chock full of flowers. At least the visuals were outstanding on the route. What you don't feel here in the images is the heat, the dust, and the total lack of wind in the morning.

With Impala Road looming, I had some good thoughts. I knew we were going to have some awful climbs in the beginning sector of that road, and I knew we were in for a real treat on the final two miles of that road. It didn't disappoint either. 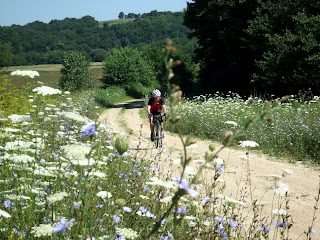 The climbs going in were totally killer. Super steep and it was getting really hot by now. But the ending was fantastic. You crest a steep climb and immediately dump down into a true mountain bike-ish drop in on loose, head sized boulders going steeply down. Into a canopy of trees, the road drops down every so often with exposed slabs of bedrock and loose, large, irregular sized stones. This eventually gives way to rutted out dirt and rocks, still going down at a fair rate of descent until it levels out to a good ol' dirt B Service road that hugs the Turkey River. Coming out onto a county blacktop at Elkport/Garber, there is a hedge of wild flowers where we sat in ambush of Jeremy Fry. Jeremy had a cross bike, and he doesn't fancy himself a mountain biker, so he was going slower. I found out later he actually took a couple headers coming down, but claimed he was none the worse for the wear. 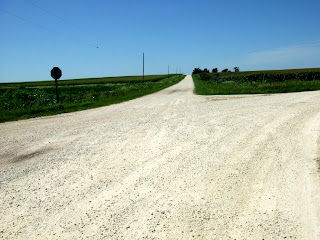 We skipped the Elkport convenience stop and aimed for Strawberry Point. The only thing was that now we were facing some of the most brutal climbing on the entire route.

Basically, everything was going as well as could be expected. It was so hot by now though that we were all going pretty gingerly and the rate of progress was coming down rapidly. I was still climbing every hill without walking, or wanting a lower gear until the Fantail Road climb. My body was shutting down, and I needed to take a break. Jason and Jeremy disappeared up the 18% grade as I pulled over to cool off under a shade tree. I ate some trail mix, downed some water, and then I felt cooled down for sure, but I had nothing for power now. I walked the steepest part and rode slowly to the top where I found Jason sitting in a corn row and Jeremy standing next to him. I pulled off and joined them where I announced that I had cracked and this infernal heat was just too much. They agreed to head for the nearest town, which was Edgewood, to get refueled and plan a paved route back to West Union. Jason asked on the way in. "Hey, didn't you guys stop a Trans Iowa here?" To which I replied in the affirmative. He responded with, "How fitting!"

I suppose it was. 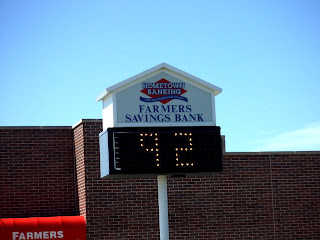 We sat in Edgewood, refueled, cooled off, and asked about directions. I passed on the clerks route, which would have had us going over two major ridges and doing the first part of the route backwards.

I opted for a Strawberry Point, Arlington, then to West Union type route which I knew would be much flatter and given the heat, a wiser choice. We set out for Strawberry Point on the highway, but coming into town I was fading fast. It was as if I hadn't eaten at all. I get really sleepy when I am hungry- weird, I know, but that's how I can tell if I am hungry. Well, I had just eaten, and now instead of pepping up, I was falling asleep on my bicycle. When we got to the other side of the town, I told the guys to go ahead. Jeremy said he would come back to pick me up. I suggested that I could limp into Arlington and he could get me there. So that's where we broke fellowship and I soldiered on alone the last miles into Arlington. 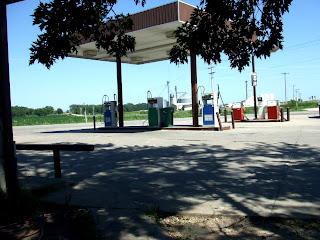 So the Guitar Ted Death Ride Invitational ended for me at a lonely, run down gas station on the eastern edge of Arlington after 80 plus long, hard, and very hot miles. Jason and Jeremy rode in the pavement and got their centuries in. Jeremy came back and graciously picked my sorry self up and carted me back to the camp grounds and I packed up everything and came home.

Looking back on what happened to me, I now know it was a nutritional issue. For some reason, my body wasn't absorbing the calories as it should have. I know this because everything was "expelled" from my system once I got home. Let's just say it wasn't pretty and leave it at that! Why that happened, I haven't a clue, but it did.

Thanks to Jason and Jeremy for riding. It was a great day to hang out with two fun guys that are great cyclists to boot. Thanks to Captain Bob for the timely visit at the camp ground. I know Jason was glad you stopped by as well.

That was the last ride for the GTDRI on that route. Next year will mark a move to a slightly less challenging, but still fun route in the mid-section of the state. Stay tuned to the GTDRI site for details.
Posted by Guitar Ted at 1:00 AM

Nice write up!
I may have to visit your neck of the prairie sometime...
It was hot out west too! :)

Heat...humidity...gravel...hills. Sounds perfect for misery served on a 29" plate.

I told you that you should not try and use pepperoni pizza as an endurance food!

Wish i could have ridden with you Mark! I know those roads pretty well from riding them myself. Steep for sure. And fun. *maybe* next year.