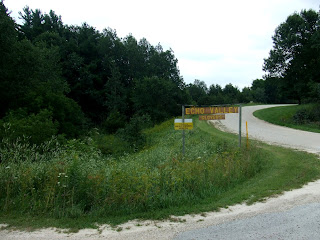 <===This is where you turn left where the pavement ends outside of West Union to get to the campground.

I went up and did some limited recon Wednesday. I didn't have a lot of time, so I focused on the camp ground and the opening part of the route.

The camp ground is in great shape. I was worried that springtime and early summer rains and winds may have damaged some things here, but everything looks in order. One thing I should point out is that there is a low water crossing as you come into the camp grounds. So drive slow and try not to make a huge wake. This is a trout fishing stream that you will be crossing, and we do not want to tick off the local fishermen. 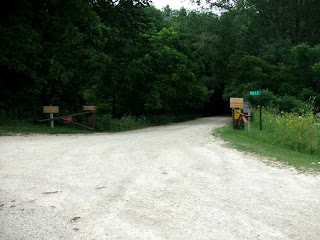 <===This is where you turn right. It occurs immediately after you make the turn described above.


I poked around and found a short cut across a high flung walking bridge that takes you almost right to the start of the ride. (Which is at the big Echo Valley sign in the first image) I think Jeremy Fry may have found this last year, but I can not remember for sure. Anyway, it avoids having to cross the low water crossing with your bicycle. That may be a good idea this year, since the water is a bit higher than last year, as I recall. We'll be starting at 6:30am SHARP! We will need to get rolling as soon as we can to allow for enough time to get everyone in before dark. Or at least enough time to get me in to Camp! 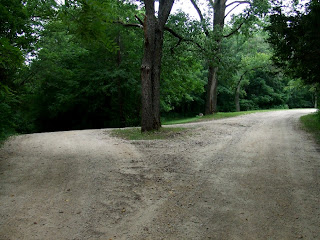 <===After the first two turns, and a low water crossing, you'll go up to the left. Very steeply! Then you'll see this tree. Stay to the right! This takes you right and up some more.

The gravel leading out to the first miles of the route is loose! The county must have maintained the road recently. This gives me concern for the first big down hill, which has a dogleg curve in the middle of it and is a 10% grade descent. I almost ate it big time here last year, and the road wasn't laden with fresh gravel. Be careful if you come Saturday and ride this! You'll need great bike control and great brakes! I will say that it looked to me like the best line down was to the extreme left as we go down this steep, long hill. It will lead us out into a river valley where the views are spectacular. 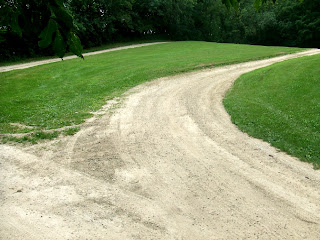 <===When you see this cul-de-sac, look to the right and I should be there! (Well, by Friday evening, any way!)

I specifically didn't take any images of the route to share before hand because I wanted to let it be a surprise to anyone that shows up. I actually had forgotten how cool it is!

At any rate, there are a few rollers to start things out with, then after the aforementioned gnarly downhill, we'll settle into a gentle river valley with a river escorting us along the way for most of the first 25 miles or so. This leads us through the sleepy burg of Elgin, and ultimately to Elkader. This hamlet is pretty picturesque. You'll want to scoot around and grab a few photos of the local architecture and the famous bridge over the Turkey River here before we pull out of the first convenience store stop. 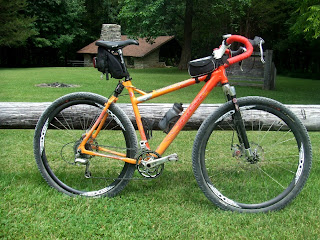 
The roads were covered with pretty fresh, very dusty gravel to Elkader where I had to peel off and head for the shed. I can only imagine that the rest of Clayton and Fayette Counties have been similarly maintained, so expect rougher, sketchier roads this year. I have heard that the Impala Road section was ridden this year, so that is still there for all I know. Even if it isn't, we can easily go around on pavement.

Okay, my bike for this ride is a variation of the theme I used at the Dirty Kanza 200 this year.  I swapped out the flat bar and controls for a Woodchipper and STI levers. I did a bit of fine tuning while on recon and I think it'll work okay. I can't get a "Bike With No Name" , so I had to come up with the next best thing! A Salsa Cycles Dos Niner with drop bars! It's light, it has some cush, and I could actually put a suspension fork on it if I so desired. With the Edge Composites carbon wheels, it is a pretty awesome ride so far. I'll give a final judgment on Sunday!

I did do something here that you are not supposed to be able to do. (And I do not recommend that you do this either!) I used mountain BB-7 calipers with road levers. It ain't supposed ta work, but mine does. Just fine too. I slapped on another part that isn't supposed ta work too. An Ultegra long cage derailleur that is shifting a 12-34T cassette. Not enough capacity on that derailleur, they say. Pssshaw! Works just fine. The front gears are 44T/29T by the way, and are rings pinched from an Origin 8 crank set which I mounted to an XT crank. Chris King bottom bracket and a Bontrager Switchblade 38mm offset fork round out the package. Stable handling be good on gravel! Especially with the crazy descents we'll be seeing Saturday.

Well, at least I hope to be able to see those descents on Saturday, barring any crazy weather damage from the overnight storms!

That's it for the Pre-Ride Reports. Look for a Recap of GTDRI on Monday!
Posted by Guitar Ted at 1:00 AM

Nice setup GT. I had similar things in the back of my mind looking at my Dos Niner frame sitting here all last winter. Have you looked into using something like the Bruce Gordon QS2's to make swapping out flat and drop bars a bit easier?

@Steve: I don't think I'll be taking off the drops, so I wouldn't need such a feature. To be honest, it was either put the Dos frame up on the wall or convert it into a gravel/back road adventure bike. Maybe some light single track too.

I just never got on with this bike as a full on mtb. The drops are much, much better, and the rigid fork tightens up the front end enough I can live with this now. It was just too noodly for me otherwise.

If Salsa can figure out this design with a torsionally stiff chassis, I'd be all over it for my single track fun.

Before i found this i thought of doing the exact same thing to a Dos. What fork did you use? I am thinking the higher the better for the woodchipper bars but too high might make the bike to over steer. Would really like to hear you thoughts about this.

Janne Karlsson: I used a Bontrager Switchblade fork. It is 468mm axle to crown, and has 38mm offset.

Bar height is a personal thing, but I like my drops lower than the saddle and so i strive for that sort of set up.

As far as the Dos went, I wasn't overly enamored of the flex it exhibited. I had a love/hate relationship with that bike for sure. There were rides where I absolutely loved it, and rides where the Dos was frustrating and I hated it. I can't really say why.

Eventually it got mothballed and it sits as a frame only in the basement storage now.

I have done the Fargo in both generations with drops and that design works much better for me and how I envisioned the Dos. (One of the Fargos has a Thudbuster ST)