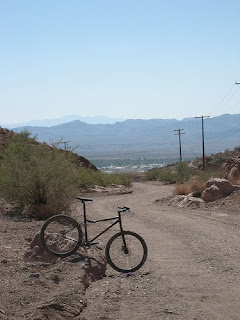 <====Haro Bicycles announced recently that they pulled all 650B wheeled product from the line for 2011. (image by Arleigh Jenkins for Twenty Nine Inches)

In a not too surprising move, Haro Bicycles announced on mtbr.com yesterday that there will be no more 650B wheeled bikes in their line for 2011. This will be a blow to the wheel size since the brand manager, Jill Hamilton, was an outspoken proponent of the wheel size and brought 650B into mass production when the Beasley mountain bike line was brought out in 2008.

The comment made by Hamilton which I found interesting was that the decision was a dealer motivated one. Dealers were not buying into the 650B line because they were not wanting another mtb segment in their stores, or were not able/willing to spend more time and effort educating a labor force and consumers on a little known, niche wheel size. If that is true, then it is something I have said all along would be a cause for the 650B wheel not to grow in popularity. (References here - from the very first post I did on the wheel size, look at my comment #2- and here which is my last post on this blog regarding 650B wheels)

I'm not saying that I am any great prognosticator. I just feel that some of the thoughts I have on 650B are just plain common sense. That's all. Anybody could arrive at a similar conclusion if they study the facts. I've been in retail all my life, and my thoughts on the dealer side of the equation stem from that experience.

But that isn't all that is going on with 650B. (Or isn't going on, depending upon your viewpoint) This wheel size, which was ballyhooed as "the best of 26" and 29" wheels" isn't really that at all. It is a compromise that isn't as good at what 26 or 29 inch wheels can do. Basically, a "jack of all trades, master of none", if you'd rather. That isn't good marketing copy, and it doesn't get riders all that excited. It's a tough sell, and that isn't going away. Neither hot, nor cold, 650B finds itself stuck in a middle ground that I think it will be resigned to for eternity.

Going back to what Hamilton of Haro Bikes was talking about in the announcement, she related that Haro may "jump back in" if one of the "big three" gave the wheel size some support. (Translation: If Specialized, Trek, or Giant can convince the component manufacturers to make forks, wheels, and tires for a 650B line up one of them supports, we'll tag along for the ride.) I don't think that is likely to happen, and here is what Grannygear, my co-writer at Twenty Nine Inches so astutely pointed out. Why would any component manufacturer, or bicycle manufacturer jump into 650B specific components and bikes, when everyone can just convert what they are already selling?  For instance, the biggest viewed threads on mtbr's forum that covers 650B wheels are ones about which 26"er forks and frames fit 650B wheels. You'd be surprised how many brands and types of mountain bikes work with the slightly larger 650B wheel. 29"ers were not like that. They required specially built frames, forks, wheels, and tires. It made sense at some point to sell riders what they were asking for. 650B doesn't have that necessity. It's there for the taking, all you need are a set of wheels. That isn't going to motivate a big company to jump on board with another wheel size. My take? Don't look for Haro to be "jumping back in" anytime soon.

Finally, this whole conversion from 26 inch bikes to 650B begs the question, how different is 650B from 26 inch wheels? Ardent supporters of the wheel size will say there is a lot  of difference, but really, there isn't. It is an incremental change, and it definitely doesn't do what 29 inch wheels can do. Better than a 26"er? Not really. Barely, if at all. (And yes, I have ridden several 650B bikes) The thing is, it isn't a "big enough" difference to make it worthwhile.

The other arguments for 650B, (mostly aimed at 29"ers), are also falling by the wayside. Wheels for 29"ers are too heavy, (Not anymore), you can't make a good long travel FS designs in 29"er wheels, (now there are many), and small riders won't fit on 29 inch wheels. (That's been debunked by World Cup level pro women riders) There isn't really a good fit for the tweener wheels anymore, and that is going to remain a stumbling block to success for 650B as well.

Like I've said from the beginning in 2007, it just doesn't make sense that 650B will be anything but a curiosity for mountain biking going forward. I haven't seen anything that makes me think otherwise and I don't think I will.
Posted by Guitar Ted at 1:00 AM

This is tough, I have a couple customers that really like the 650b thing, and as a retailer, I have the knowledge of the product. Sure I don't stock it, but then, I don't stock much for 29" stuff either, as much as I love it. Its all 27 x 1 1/4 and 26" all the time here, thanks be to Mallwart.

650B is supposed to be the ideal "loaded touring bike" size. So, rather than going up from 26" MTBs, coming down from 700C road bikes should have been the approach.
There is a (French?) society to preserve this size, La Confrérie des 650: http://www.cyclos-cyclotes.org/650/index_ang.html

I agree, 650b doesn't make sense in the real world of the bike industry. That being said, I like it for my MTB and as long as someone keeps making rims and tires, I'll keep riding my B-Side.