Not too long ago in "Bicycle Retailer and Industry News" there was that article I talked about which was instigated when I saw the story about "fat road tires" in some coverage on Taipei Bike Week.

Fat road? Sounds like an oxymoron, doesn't it? We're so accustomed to thinking "road bikes = 23mm width tires" that the terms "fat" and "road" are seemingly incongruous with each other. Well, it hasn't always been that way.

There was a time, long ago, when road bikes were plying roads not so well manicured as ours and the tires were a bit more "voluptuous" than they are these days. Of course, those tires were usually tubular, glued on types, and when the easier to manage clinchers came along, tires started out big, then they got small.

Materials technology allowed for insanely narrow, tiny tires to be produced which bred a perception that the skinnier and higher pressure you could get was faster. Of course, nothing could be further from the truth, but just try prying those 23mm tires way from most recreational roadies. Go ahead. I dare you.

Anyway, being locked into riding "just pavement" was never in my DNA as a cyclist, so gravel, dirt, big rocks, ruts, and mud all figure into my cycling. Your skinny roadie bike is a total fail where I go, most of the time. So, I resorted to 29"ers at first, and then I found the BMC "Orange Crush" bike, slapped some 1.9" fatties on it, and never looked back. You can check out these frames here. 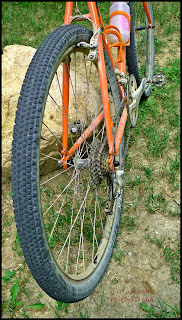 If you check out that link, you'll read how a trend to building road going bikes with more versatile, fatter tires is not just a thought, it is here, and probably coming to a local bike shop. (Well, in fact, it already is here.) The fatter road tires to fit these bikes are rare now, but the manufacturers are gearing up to make more with the same/similar features you see on high end road clinchers in the 23-25mm range now.

Why should you care? Because for years, most road cyclists have been riding "stupid for them" bikes. That's right- bikes meant for serious criterium/long road events being sold to the average recreational cyclists is a really stupid idea. That's right- I said it.

Think about it: If you have bought into the high end roadie bike because "I can own the equivalent to a F1 car" , you are being blinded to the cold hard fact that this road racing rocket is impractical, uncomfortable, and not the right road bike for you.

Let's say you could own an F1 car. Would you actually drive it? Well, heck yeah! At least once or twice, but are you going to commute to work in it, go get groceries in it, or take the kids to a picnic in it? No, you are not. I would submit that this is what you are doing with your "F1 roadie rocket" though.

At the risk of sounding all "Grant Petersen" on you all, the "fat road" bike trend isn't new, but it is practical, and you should be paying attention. Hopefully a better road bike is in your future.
Posted by Guitar Ted at 12:12 AM

Heck yeah....now what I want is a light weight roadie styled bike that will fit 35mm tires. I want hydraulic discs that will work with shimano/sram brake shift levers. I want a relaxed position much like that that Grant at rivendell talks about. I want the bike to look beautiful and be practical at the same time.

Basically I want the latest technologies mixed with traditional styling and materials. I'm not afraid of carbon, but really I don't need a full carbon bike. I don't race, but I can appreciate the qualities of a bike that is designed to fall more on the race side of things rather than the full loaded touring end of the spectrum. One might say I am looking for a fully tech'd out Randonneuring bike.

Who is going to make this bike and when will we see the components for it such as hydraulic drop bar shifters/brake levers.

On my commuter, I switched from 28mm tires to 25mm tires a while ago (the 25mm were on sale at a big discount). I liked 28mm a lot better... but even with discounted tires I feel like I have to use these a while longer before I'm justified in getting new ones! Maybe this spring or summer... and I'll be taking a look at the 32mm as well.

Great story... I already have my "fat road" bike. It's my Salsa Vaya. Perfect...

Touring bikes with 35-42 tires are way more useful. That is why my "road" bike" has Marathon xt at 38 and rides the gravel/pavement/and dirt with gear and tent... not so much the mud though

I agree, and would like to see a blend of current bike tech with more sensible tire choices. My 2012 Madon for instance is a whole different bike with Challenge Parigi Roubaix's installed. It's lost nothing of it's super-carbon go fast tendencies, just the opposite. Everything I loved about the bike before is ply made better by these tires. Better comfort, better cornering, and they roll like crazy. Heck, with the huge carbon tubes the tires don't even stand out as looking big! I'm in love.

I'm stuck on 28's. I love the ability to hit any road I come upon with this bike, including a bit of dirt. I for one welcome out new fat overlords.

yeah, the above is me.

Oh, and I LOVE the BMC. Great looking bike Mark.

What size tangle bag is that?

@Adam: I believe it is the regular sized one, not the large. In fact, this one goes back to when it was still "Epic Designs", and these are different now than they were then. Basically it is similar to the new ones.

Guess that would leave my Cross Check and I back in the future.

i love my new one

I'm a former road racer who knows the difference between Clement Criterium Setas and clinchers, and it pains me no end to see the masses cajoled into buying tomorrow's garage queens. Good to know that someone else recognizes we aren't all Andy Schleck. (thank God for that!) Give me a bike I can ENJOY riding, not some status symbol that will spend its life hanging in the garage because I don't enjoy being a contortionist bent over some gosh darn torture machine. It warms the cockles of my heart to see folks riding practical machines that will actually perform some function other than to display the disposable income and ignorance of the rider. Ted, keep up the good work!

Couldn't have said it better myself, Ted. Our shop purposely goes heavier on the cyclocross bikes, simply because they are more "jack of all trades" for our average-Joe customers. One of my own personal bikes is a Specialized Tricross, converted to single speed and shod with a 45C all purpose tire. I keep this bike at the shop so that I can roll it out during a sale and demonstrate the versatility given by a quick tire change. I can't tell you how many customers perk up at the idea of plusher rubber. After that, it's a matter of ringing the sale up.