The Roadies, They Are A Changin': A few days back I got to build up my first Di2 bike. If you don't know what that is, well.....where have ya been? But that's okay, if ya don't know. It is electronic shifting. The derailleurs move via an electronic impulse sent to a servo motor on a derailleur.

Why? Well.......because it is "better"! (Of course) That's what Shimano, the bike companies, and the bike shops want you to believe. And in several ways it is better. But nothing comes without compromises. There are a few glaring ones that you don't hear much about when these bikes with Di2 get discussed.

A few things jumped out at me when I built the bike. In no particular order....

But other than that, it's awesome! 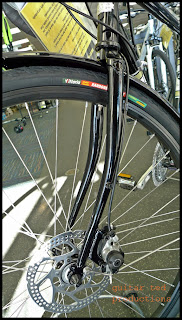 And then there are those disc brake thingies.... The other deal going down with roadies is the whole disc brake wave that is coming for model year 2013. I find all the hoopla a bit ironic, and a bit humorous, since it reminds me of mountain biking circa 1999.

Disc brakes arguments were heated then. "It'll never be anything other than a down hill thing", or "it will weaken wheels to much", or again, "wheels can't take those forces from disc brakes without being made so heavy I won't ride them."

Similar roadie specific grievances are being put forth even now. Of course, none of it will matter in five years. By then it will be an accepted part of the scene, and road bikes without hydraulic brakes or mechanical disc brakes will be seen as quaint, retro machines, not unlike how 650B rando bikes are seen today.

My question: Will there be a "Roadie Retro-Grouch Societe'"?  I want to buy the t-shirt if that happens. I have the mtb version mothballed in my collection to go with that.

But seriously- If the whole brifter-with-hydro-brakes thing can be solved, I would definitely be interested from a drop bar mtb/gravel grinder viewpoint. And ya know what? I am 90% sure we'll see something this year yet for that. Of course, you'll have to upgrade to 11 speeds out back! That's okay though, since I'll just ditch the front derailleur thing-a-ma-bob altogether when that comes down the pipeline.

Speaking of gravel grinders..... My next event is CIRREM which happens next month near the end. Wow.....by the looks of the way things are going, I may use a Mukluk at that event too! Either way, it is a hilly, metric century length deal that I know I can do. I look forward to getting down there and seeing the Des Moines folk I have met. Great folks!

And gravel grinders continue to come out of the woodwork! i have been getting hammered by promoters wanting their rides up on Gravel Grinder News of late. The calendar is filling out nicely with quite a few first time additions.

And finally.....I have started the cue sheets for T.I.v8. So far I have up to Checkpoint #1 done, and by the end of the weekend I hope to have most of that job bagged. Then after that I will hand off some drafts to a couple of folks as we drive the course to double check things in the field. I will have also double checked everything myself at home first by that time as well.

Hopefully that part of Trans Iowa will be dialed before the event starts and not prove to be a stumbling block to any of the riders.

Have a great weekend and get outside and enjoy life if you can!

"Will there be a 'Roadie Retro-Grouch Societe?'"

I am convinced that a fairly sizeable one already exists. Why else would Campagnolo release an all silver alloy 11-speed groupo? Why are there so many expensive high-end steel road frames out there, from the likes of Rivendell and Waterford? How else would Velo Orange stay in business?!

The road biking scene is just much more conservative in general. Must be something to do with the much longer history, and strong traditions of the sport. This is reflected in the retro-grouch outlook of the UCI when it comes to machine design.