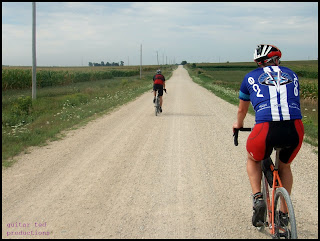 Same route as always, and also similar looking skies to what most of the 3GR's have had. Some overcast with threatening rain clouds out to the West.

The ride went pretty fast, just about the same as last week, and therefore conversation was at a minimum after we got into the rollers on Streeter Road. There also was some more fresh gravel that made the going a bit more difficult than last week. Even though the rain should have knocked down the dust factor, it was still pretty dusty out there, which shows me just how badly we still need rain.

The big thing that developed from this ride is that we decided that in almost two weeks the 3GR will be the 3GR- The Fat Bike Version. That's right! On Saturday August 11th, the 3GR will be for fat bikes. Mike, Craig, and myself will be planning to have our fatties there, and if you want to bring yours, please do so. If you do not have a fat bike, well come on and ride anyway. Listen to the car tire-like crush of gravel as we roll at least three fatties on this 27-ish mile loop.

Should be a good time, and there is talk of eating Pedro's burritos afterward. We'll see, but it'll be fun regardless.
Posted by Guitar Ted at 1:30 AM