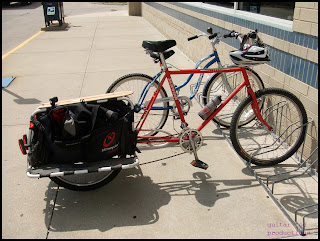 I guess it goes without saying that it has been incredibly hot outside of late. That has really affected me in the past few days.

First of all, it affected me in a personal/family sense when one of our A/C units went down and the upstairs of this old house of mine became unbearably hot.  I had to do something, and it happened to fall out that I was able to make a trade with a co-worker for a good, slightly used A/C unit.

I got that installed on Friday evening and the house became a bit less beastly, which made Mrs. Guitar Ted happy, and that is a good thing. Next I had the 3GR for Saturday morning, and the heat wasn't going away just yet.

The 3GR ended up being a solo ride. I decided to head out on the typical route to measure it to see how long it was, since I hadn't done that before. I followed a fellow out on the paved section that had a pretty blue road machine, and then hit the gravel. I wasn't feeling too bad going East, holding my speed and everything was working fine despite the heat. Then I turned North.

The 3GR route backwards up Streeter Road is not very smooth , with chunky gravel all the way to the county line and the hills, of course. that combined with a Northerly breeze made me work pretty hard. Okay, still not bad, but I was working hard. The hills up by the Camp weren't bad, and then I saw a few cars in the Camp's South side grassy parking area.

It was Karmen, Alan, and Paul having a little pow-wow concerning the trails. They do the oversight and maintenance up there on those trails. I decided to swing in for a chat. Then I took my leave after about 10-15 minutes and finished out the route. 26.75 miles, by the way. Knocked it out in 2 hours including chat time.

Then I decided to do an errand after lunch with my Xtracycle. The box wasn't all that heavy, and there was a nice breeze, but this was in the heat of the day, and after I got home, I was super-fatigued. I felt like I could have gone straight to sleep, but I layed down and took it easy instead. I never really did recover all the rest of the day. Definitely "zoinked" by the heat!
Posted by Guitar Ted at 9:01 AM

Just getting started on an unplanned move this past week (as in,out of the house into another),this heat's caught me harder than usual too,Mark...I haven't even been riding in it since the first half of June-and I normally do very well (if hydrated) in the heat (as my mtn biking buddies,insert evil genious laughter there).

Loving the Xtracycle shot (loving my Xtracycle too,hard to believe it's been here a couple months already! I dig those Wideloaders ya gots! :) ) :)

@Oldskoolrodder: Thanks! This rig gets more rubber-neckers than anything I've ever ridden, including a 36"er I had on loan from Ben Witt for a time.

Don't haul anything with a Xtracycle if ya don't like attention!

Keep cool and stay hydrated! Good luck on that move.

Yeah,LOL,it gets more looks than even the folders (which as far as I know are the only 2 folders in the area,at least that I've seen),LOL,eSPECially when hauling an odd load.

I regret that I won't have op to use it as much moving where we're moving to-kinda out in the sticks (not as far out as before we lived here,thankfully)...yeah,I hate that. Not like we had much choice in the matter though,so that's life :p