The weather for Gravel Worlds was about what I would have expected- Humid, hot, and not a cloud in the sky. The one thing that was missing for much of the day was wind, but it did not stay away all day. I was prepared to be calm, structured, and resolute in my approach to this event. Despite all the concerns I have in terms of dealing with the heat, I felt I was going to do okay. Oddly enough, it was cool and clammy at the start. That suited me just fine.

We got up at 4:00am only to find out that the hotel's breakfast for the riders didn't start until 4:30am. That seems like it is cutting things close, but at least they had the basics for food and I got a decent breakfast of eggs, potatoes, and a little bacon. A cup of coffee topped it all off and I was hoping to have a "morning constitutional", but it never happened. Bad sign number one right there......

So we piled in to Tony's truck, which we drove to the start and parked in the "VIP" lot, thanks to the kindness of Cornbread who helped check us in the night before. That meant we were a very short bike ride from the start. The parking lot was jammed with vehicles of the "Bike Nerd Tribe". You can easily spy these tribal members by the folding bike rack, or on occasion, the roof rack. The vehicle also must have bicycle company related stickers and/or event stickers on the back. True dedication to the sport of cycling is shown by such vehicular manifestations. (I joke, of course, but check it out sometime. Many of us do drive cars like this!)

So anticipation grew as the time drew nearer to 6:00am, the "official" starting time. Either Schmidty was using a winder watch which was slow or Cornbread was just too busy chattering over the loud speaker, I don't know, but 6:00am came and went. We finally heard a faint "beep beep beep" of some car. Off we went at a couple minutes past. Not a big deal from my standpoint, although I will say I missed the big blue Ford truck rumbling away in front of us.

The start was calmer than some I've experienced here and after the few roundabouts and paved roads we were off on to the gravel. The course headed mostly North and East to start out with. The gravel wasn't as washed out and deep as I remembered it to be two years ago when we left in a similar fashion to this year. I wasn't swanning around and neither were the riders around me. Another surprise was how quickly the field strung out. I don't remember being passed by a lot of folks like last year nor passing a ton of folks as I did two years ago. Calm. Nice. Not too nervous. It was a good start.

The hills weren't bad here, but it was rolling countryside. The hill tops afforded fantastic views of foggy valleys and the encroaching pinks and oranges promised to give all those up early enough to notice a spectacular Sunrise. I suppose about half the field was snapping away with digital devices out there, and I do not blame them one bit. It was a great morning to be a cyclist and be alive. So, pardon me the indulgence, but I took not a few images during this part of the ride! 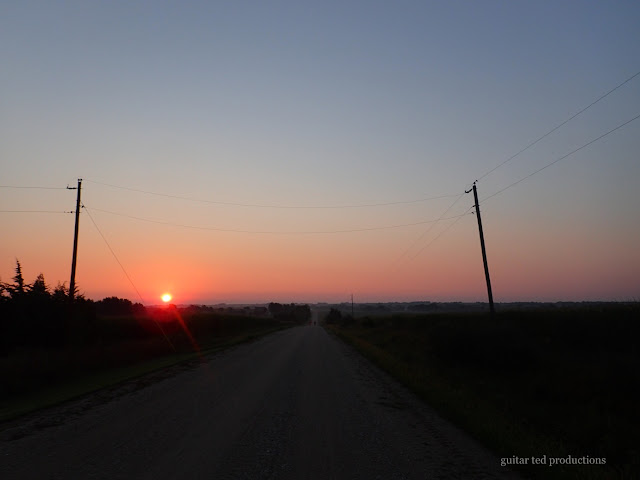 So, I have a few more of these Sunrise time frame images, but those should give you an idea of what it was like. Beautiful with a capital "B". No wind. It was cool. Just perfect riding conditions. The one thing I think shows up really well in the last image above is the way that the gravel is around Lincoln, Nebraska.

It is sandier gravel. There is a hardpack base, which when exposed looks like an aggregate that you sometimes see in concrete or blacktop roads. It was harder, but it wasn't always "there". Most of the time it was like riding on coarse sand/dirt with a lot of "ripples" or washboard, as we call it in the Mid-West. Get into that washboard and your bicycle starts bucking and pitching you into an uncontrollable mess. Not to mention the jarring sensations to every part of your body. Out of the washboard was generally deeper, looser sand/gravel which would suck the life out of your legs and cause your bike to wash out. Much of the course was like the image above.

I ended up riding with a few people here in this section. A nice young woman from Chicago who was a native Washingtonian. It was her first go at a gravel event. I also had the honor of riding a bit with Lee Buel from Des Moines. It was a great section and I felt very good through this first part of Gravel Worlds.

I was a bit amused by a section where the County had closed the road, (but the signs were pushed aside. For us?), and there was a load of what the Nebraskans were calling "white rock", or in Iowan's reckoning, "just plain gravel". It is vastly different than Nebraska gravel though and this short patch, which was about four inches deep in fresh gravel, had folks dismounting to walk through it. I rode right on by. Of course, I knew how my bike would handle it and I knew I could do that.

Then the hills rolled on, we went Eastward a fair bit, and the elevation gain was piling up. My altimeter was grinding upwards toward 1350 feet many times through here. I know you mountain folks scoff, but Gravel Worlds had 11.000 feet of elevation gain, so it ain't no joke. Nebraska is definitely not flat!

Soon I crested a big hill and then came the fast descent into Valparaiso, Nebraska. This was about one third of the way in to the course and my first stop of the day. Only about a 100-ish miles to go!

Ted, your bad sign #1 is actually a reference to "#2". Please keep your numbers straight as it's important your writing is factual.

Seems at bit presumptuous calling yourselves "gravel worlds" if there is a competitor entered on her very first gravel event.

@youcancallmeAL- That was pretty much the entire point when they changed the name of the event seven years ago. ;>)