Last week I read a story posted on the Outside Mag's website written by Eben Weiss, better known as the "Bike Snob". It was entitled, "The Death of Road Riding". You can click that title to go check it out if you want to.

First off, road riding isn't dead. it merely moved. Might I add that this was for several reasons, not the least of which is the roadie culture which the "Snob" has made his reputation on. But that aside, gravel riding and racing, (which is commonly put down by many in the established cycling media), has siphoned off a lot of road racers and potential road racers with its grassroots appeal of just "riding whatcha brung", lack of "rules", and open armed welcoming of anyone to the fold. So what if your skewers are on the wrong side and so what if you run a fannypack and a seat bag under the saddle. Whatevs'. Bring it on and let's have some fun.

Then there are the obvious things. Some of which the Snob alludes to. Like the family friendly vacuum that has always been an issue with criterium and road racing in the US. That definitely is not the case with the gravel riding scene. Heck, I saw a mother with her two children meeting a rider at a convenience store to watch him come in and out at Gravel Worlds a week ago, and they did that happily all day, as far as I knew. Many families come out to these events to do things in the communities the gravel events pass through or are hosted in. Family friendly? I'd say yes, it is. Gravel rides are definitely welcoming to all.

The roads, at least the paved ones, are rife with distracted drivers, so, heck yeah, why not go ride gravel? Or a back road? Or a Forest Service road? (NOTE: The word "road" is part of all of these places to ride.) 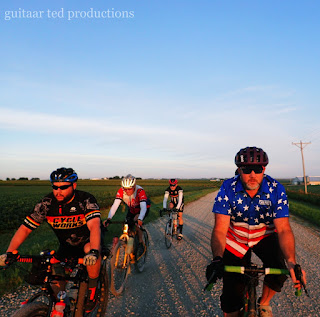 Okay, so let's get to the heart of this. A veiled swing at gravel grinding is what is going on here.  Gravel bikes are poo-pooed, but for stupid reasons. I've covered the minutiae that various permutations of road disciplines use to justify better performance often described in millimeters and half degrees. Saying that gravel bikes are silly because they vary so little is the pot calling the kettle black at best. At worst it is definitely bitter hypocrisy.

The lament that road cycling teaches things you cannot learn anywhere else is pure BS. Obviously the draft lines at Dirty Kanza, Trans Iowa, and Gravel Worlds have gone unnoticed or were ignored by the Snob, and a lot of those riders learned how to do that on gravel. not being yelled at by some crusty old patron of some cycling club. He claims road riding on pavement is accessible. Well, thank you, Captain Obvious. No kidding. But saying that "gravel can be difficult or even impossible" to find doesn't include other types of roads like dirt, Forest Service, or even long forgotten trails and byways which are waiting to be explored everywhere. Oh, and by the way, there are gravel events in almost all of the 50 states and internationally many countries have gravel road events. It isn't all just here in the Mid-West. Far from it.

So check it out. Road riding is not dead, it just moved to a more fun, less restrictive, and more welcoming set of roads. And that's a good thing.
Posted by Guitar Ted at 1:30 AM

I was riding in a peloton yesterday in Minneapolis. It was a peloton of families and other folks on a local of street bike trail headed to a river front park, but I'd have to say that wrangling a couple of kids, blankets, toys, and dinner in peloton on a narrow, twisty, bike path takes some serious skill.

I also saw a young woman do a perfect running dismount from a fully loaded cargo bike!

I did'nt get the feeling he was taking a swing at gravel riding at all.

I rode a 75 mile loop on gravel Sunday around Tama Co., and actually waved at several vehicle bound souls who WAVED back, never got that on the highway. Give me dust and grime any day!

Not sure I saw the swing either. If the blog is any indication, he's been advocating for relaxed riding, gravel riding, bigger tires, not giving a crap about roadie fashion, etc. for a long time. I think there's a little poke at the marketing side of the industry for creating terms for bikes that a lot of people (Weiss included, it seems) have been riding for a long time. But I also think he's admitting there (and also on his blog through the years) that the shift toward gravel bikes or adventure bikes is really a positive as people are buying bikes that are more comfortable, more practical, and more suited to laid-back awesome gravel-type events or rides.

Well said Brian. he seems to support the adventure style riding while getting a dig in at the same type of niche creation all leisure equipment manufacturers and many enthusiasts engage in.

Bryan and Al, I think you're right that bikesnobnyc's beef is with the major bike companies. His big criticism over the past few years has been that those companies have overemphasized the necessity of separate bikes for what are ultimately similar activities (riding gravel, riding dirt, and riding paved surfaces) rather than making a single bike that can do all of these things comfortably. That being said, I can see how his article can be interpreted as a critique of gravel riding as an activity since he describes it as a "craze," indicating its participants are kind of silly and misled.