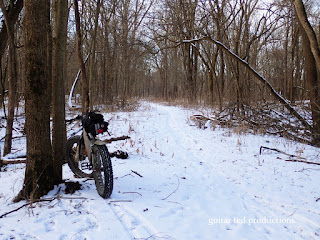 Well, a week makes a big difference. One week ago we were just crawling out of the depths of a wicked cold snap and now we are flirting with 50°F and thunderstorms! Talk about "weather whiplash"!

Last week, I drove to work on Monday due to the below zero degree windchill and my just coming off being sick. Tuesday I didn't have to be to work till 10:00 am, so I took the long way into work on the still snowy trails. Granted, there was barely any snow, but there was still something to scrunch fat bike tires over.

Then the weather started getting warmer, and warmer. The Sun shone forth, and the snow retreated. Since there wasn't much snow to begin with, the trail conditions were pretty much toast after Wednesday. Then it was a watch to see if we might get lucky enough to get in on this storm we are having now and get snow. Well, you can see the radar for yourself. It's raining here.

But between then and now we had one, glorious, Sunny January Saturday, and I got out and had a three-fer: Two bike rides and a long walk. Yes, I made the most out of my one good day!

So, Sunday went all dreary, misty, and then rainy. Despite the news of the big blizzard, we aren't even close to getting a whiff of the white stuff. The ground is bare in almost every sense, and the forecast for the rest of the month is bleak for snow lovers. Oh well! I can always try my luck on a local gravel road, as long as the winds aren't crazy and the temperatures hold up somewhat.

So, as of now it looks as though we are going into February here with zero snow and the prospects for any kind of "Winter" are pretty much washed up now. Sure- we could have four weeks of Winter yet, but all that would do now is make people mad. It's too late. Once you reach February with no snow you are thinking Spring, and it better come quick. Any additional jabs from Old Man Winter now are just going to put that off. It won't be anything but a sucker punch now.

That said, I'd take a few more weeks of decent snow and fat biking. The likelihood of that happening is pretty low now though! The times- they be a changing, and maybe now this is what our Winters will be like, more often than not.
Posted by Guitar Ted at 1:30 AM