SRAM is introducing a new size spindle and inner diameter bearing system for mountain bikes and fat bikes called "DUB". (Did anyone warn SRAM that is only one letter away from "not very smart"?) Anyway.....

DON"T SAY IT IS A NEW STANDARD! They don't like that, so I won't say it is. ( You can- many are) The big deal here is what SRAM is claiming as a better stiffness, (retains a big spindle at 28.9mm) and better bearing life with the new bearings designed for this system. It fits any current Press Fit or BSA bottom bracket with the correct spindle length for fat or mountain bikes.

I really don't like SRAM's website. It isn't very easy to pull out technical information without digging a few layers into it, which I find frustrating, but that aside, I don't see any issues with this as long as it actually does have better bearing life than BB-30 systems and as long as it really does fit everything out there. (Most crank sets are adaptable to anything out there, by the way.) The DUB system goes across several levels of SRAM componentry on the mtb side so you'll likely see it available on lots of OE bikes in the future. Whether or not road will get this hasn't been revealed, but I cannot see why it would not happen at some point.

A conversation via text messenger and a new series on RidingGravel.com about lights has rekindled my interest in getting a hub dyno. This now would be a dream for the upcoming MCD build from Black Mountain Cycles.

Both of those things sparked an interest in trying this dyno hub thing out. I'm not 100% sure about it, but having lights always at the ready might just be a reason to do more night time gravel riding in the Summer- a thing I've missed doing. Generally speaking, getting the lights ready, mounted, and whatnot kind of sucks the fun out of spur of the moment thoughts of wandering around in the country at night. The way my life is structured now, moments must be seized or they slip away. I only get chances to do stuff like night gravel rides on a whim most times because I generally have to slip out alone.

But would I do that enough to make a nearly $400.00 hub, (not to mention spokes, rim, nipples, etc) worth it? Hmmm...... Not sure about that. So, this is what I say it is for now- a dream. The icing on the cake, if you will, and certainly an expendable part of the plan for an MCD frame/fork build. 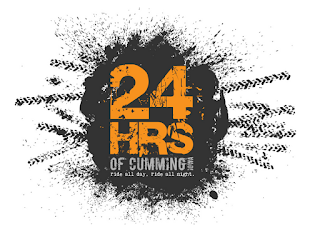 Time To Check This Out:

Hmm....... So, I talked it over with Mrs. Guitar Ted and Sam with his lady and it looks like I am in on this. So, yeah...... I said that I wasn't going to do many big competitions this year. The thing is, I am looking at this as just a big mileage day in big hills with maybe some rad gravel night riding thrown in for good measure. Basically, fun. If we do the whole gig and we evenly split the distance/turns/laps, then I figure that I would have to do about a buck-forty and given 24hrs and rests in between, that's doable. Weather can affect that, of course. But we all know that!

That's it for this week. Have a great weekend!

+1 for dynamos! I don't often set out to ride at night, but I love not having to worry about going out in the late afternoon and evening when I'm not sure I'll be home before sunset. And the quality of the beam from the Busch & Muller/Son lamps is great, good shape and brightness where you need it. Have had favorable experience with SP dynamos, who also make a 12mm axle hub for less coin.

I too love the dynohubs and will be running a SON 28 Widebody with a B&M IQ-X at TI this year. The light technology is truly mature at this point, and I've totally given up on battery lights for commuting. It's so great, especially in the winter, to roll the bike out into the dark and just have the lights come on by themselves (wired taillights are also the cat's pajamas.) Yes, the Schmidt hubs are expensive, but they also have a reputation for being very long-lived if you treat them right. Plus, it's not like batteries are free.

One last thing, if you're considering going the SP route, I'd recommend doing some homework first. They don't have a great reputation for durability, especially when it comes to bearing life.

I've got the GTDRI on the calendar again this year, it was a lot of fun last year. I'll also see you at the Renegade Gents, last count there are 5 teams coming up from Lincoln/Omaha for the race.

New to the dyno and permantly mounted light world as well and I love it. Just knowing you can hop and and ride at anytime without worrying about cables, batteries, etc is liberating. I was amazed at the amount of light the system puts out.

+1 for dynamo. But it's price is also the reason to buying a modern frame or complete bike. The one time pay a million cost was enough seven years ago.

How about a retrofit solution like the Velogical dynamo? on some disc brake wheels running TRP Spyres with Son dynamo, you need to run 180mm disc up front to clear the spokes.

I would get the schmidt. Too many stories of sp failures.

If you are looking at a thru-axle dynamo, I would strongly suggest going with the SON. I've just killed my 3rd SP thru axle dynohub (all of which are the "older" design) and I've decided to replace it with a SON. I've lost two to bearing wear and one to broken generation hardware.