At the rest stop at Mile 30-ish, Jon, who is a local rider to Grinnell and does a lot of gravel miles, was telling me the next few Level B sectors were some of his favorites. He also mentioned that they would be rougher, less kind to "bombing" down hill on, and actually were closed up until recently for "repairs". What repairs a Level B Maintenance road might need were something new to me, but Jon did mention a tractor went off one into a deep ditch, so...... That was encouraging!

As the person who made the route, I was concerned that perhaps there might be a few riders not as well versed in handling and whatnot and that this section might prove to be their undoing. Fortunately, that wasn't the case, but let me say this: those Level B's were fast, rough, and dangerous! I was topping out at well over 30mph and the bike was getting hammered. Sometimes I'd get kicked sideways a bit, and I was puckering up, thankful I did not cut down a tire at those high speeds. In fact, I remember thinking that if anything were to break on this ride, it would have happened back on those roads.

In fact, one thing did break, just not on my bike. It was New York Roll, and- of course - it was a tire. That guy has the worst luck with tires. Anyway, we stopped and he got a tube in it and off we went again. In the rain. Oh......yeah.....it started raining.

The thunder increased in consistency after the first stop for resupply and then as soon as we were off again it sprinkled and went to a very light rain. But that wasn't the worst of it. Nope. I saw lightning in the distance. I mentioned it at one point while riding alongside Tony and he said, "I'm not even going to look!" Well, because he didn't want to know if he was in danger? Maybe. This made me contemplate stopping the ride, actually. However; our little stop for N.Y. Roll's tire issues seemed to have allowed the storm to progress beyond our vicinity. The rain actually was letting up too. So I ditched those thoughts for the time being.

Now the route would go up North and into a short foray into Tama County to some ridge road I found on the map. Then it was back South to the county line with Iowa County.

I managed to find several multiple mile sectors of Level B roads which prompted Steve at one point to remark to me that he thought this was extraordinary. He was loving the route so far, and was amazed at the roads in Poweshiek County. Now, this requires a bit of background to fully understand the weight of Steve's comments.

Steve has done a few Trans Iowas, finishing a couple at least, and is well versed in the area around Grinnell as far as what I provided as routes for Trans Iowa. However; he was not aware of the rich amount of dirt roads in this vicinity simply because I could not put many of these roads into a Springtime event. They simply are not, very often, rideable at that time of year. So, I avoided these Poweshiek dirt roads like the plague, with rare exceptions. (They also were mostly on this route, by the way)

So, Steve's amazement at the roads is to be noted since many folks that have ridden in the area probably have done so in Spring. Summer riding in Poweshiek County opens up many more options, and I was taking full advantage with this fact for this GTDRI.

Thunder rolled off in the distance, rain was intermittent, but up to this point it hadn't rained hard or anything near to it. We were all in good spirits, and although I felt a bit fatigued, my back, (remember the pre-event event I mentioned?) was fine, really. I was surprised I'd put in this many miles riding so well, to be honest. Long rides have been sorely lacking, and I was pushing my mileage out to the longest ride of the year if I could keep this up.

During one stop to gather folks back up, we learned that Doug from Lincoln wanted to bail out. Unfortunately at the point he was at, it was better for him to soldier on to the next resupply at mile 60-ish and then catch a ride with Michaela who was supposed to rendezvous with us there at a pre-determined point. 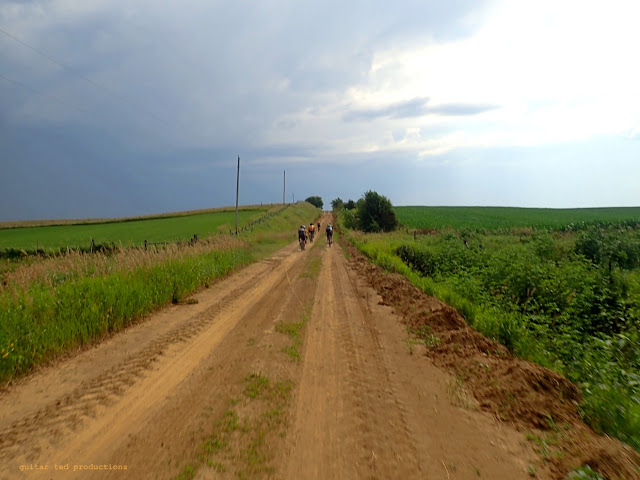 The sector that took us up into Tama County was going to go up on a ridge, but before we got there I noted that, for some bizarre reason, I avoided a perfectly cool Level B road on 400th in Poweshiek County that we used in T.I.v14. I was pretty disgusted with myself for that omission. But the ridge road in Tama County made me forget about that quickly. It was, in a word, beautiful, even though it was grey, raining, and the light sucked. I'm going back to ride that again soon. It was that good. My shots here do it no justice.

The entire ride up on the ridge was in a steady, light rain. The roads had been so dry that this didn't matter, and in fact, it was knocking down the dust a bit. We were still kicking up dust despite the precipitation though.

Eventually we rolled up on the fast guys and saw that they were taking their leisure under some pine trees to get out of the steady rain. Tony had been riding with me and as I rolled to a stop, my front wheel caught a small rut and dumped me on the grass of the farm yard pretty heavily. Tony asked if I was okay, and I said I was, but......I wasn't really. That hurt my back when I hit, and after that. I wasn't the same.

I soldiered on to the Mile 60-ish resupply. Michaela had a great selection of drink and chips! (Thank You!!) I knew something wasn't right here. My back was tightening up, and I was game to move on, but I knew it wasn't going to be good. Rob decided to bail out here with Doug, and so we were down to 12 riders.

Next: Thunder Roads Part 3, and the conclusion of the GTDRI '19 report.
Posted by Guitar Ted at 1:30 AM