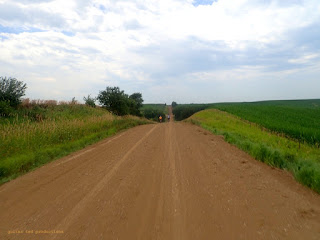 The "second stop", such as it was, along County F-17, was a welcomed respite from riding in tough terrain. Jon had been correct, the Level B roads past his "first stop" were the toughest and most technical on the day. Now the Level B's would be less, and the hills would kick in.

There is something about the area around Brooklyn, Iowa that makes riding tougher than around other villages. Well.....that something is hills. Steep, short, and never ending, or seemingly so. One after another. I often used this area in Trans Iowa to great effect. I knew full well what was coming.

I tried every trick I knew. Mental, physical, but there was just no getting around the fact that whatever I had done to myself by helping my neighbor, and exacerbated when I fell earlier, was making riding up hills painful and very, very slow. It may have helped if I had deeper gearing. I could have spun more, which is what I needed to be able to do. Pushing hard was not a recipe for success for myself at this point. It was brutal.

I got about two and a half miles from the last stop and I was cooked. The hills were what I have described. I needed to rest a bit. Then back on for a couple of really, really excruciatingly slow miles. Now here is where something happened that gives you faith in Mankind and hope for the future. Two of my riding companions weren't going to let me flounder alone.

Now I want to mention two important points here. First and foremost- This shepherding of me by these two fine fellows in no way indicts the others on the ride. Their ride was tempered by the fact that the three of us were moving so slowly, and much to their credit, they were waiting on us up the road at two different points. That's by design. It is a "No-Drop" ride, and they were doing their best to balance that with getting the ride done.

Secondly, I actually didn't want anyone waiting on me. That was unwise, of course. The two guys waiting alongside of me knew this. Oh.....they gave me space. But had they truly left me behind, I would have crawled into the nearest ditch and taken a nap. I felt very tired  from trying so hard to pedal. So, it was probably a good thing that these two guys kept an eye out for me after all.

Well, after the big climb out of the valley where the Level B was being worked on came some big rollers on gravel for a few miles and then the town of Brooklyn. I had hoped to roll into this town knowing it would provide a chance to stretch out on the grass and get some rest for my back. But other plans were made on the road.

I was reduced to walking. I couldn't pedal anymore unless it was down hill. One of the two guys alongside me suggested that they could ride back to Grinnell and fetch their vehicle and come back to Brooklyn to get me, so I agreed, and I soldiered onward to that village. Once there, I was surprised to find the group still lounging around. I figured they would have taken off by the time I arrived.

Arrangements were altered and I ended up waiting for a different ride, but eventually I got back to Grinnell, and I stopped in to Peace Tree to find Doug, Rob, Michaela, and Jon, who was with me, there to have a brew with. After a bit of small talk, Jon announced he was ready to go home, and I was too. We had not seen hide nor hair of anyone else yet and were marveling that they were still out there. Rob, Doug, and Michaela were setting out to find supper, so we left them and I headed over to my vehicle courtesy of Jon's truck. Along the way we saw the guys had rolled in, but after one strong beer, I wasn't up for another and still have the wits and alertness to drive home.

So, that was that. The 14th Guitar Ted Death Ride Invitational was over. I'll have some thoughts on gear and some final musings tomorrow. Thanks for reading!
Posted by Guitar Ted at 1:30 AM

All this party and no one left with a nose bleed!? The eighties is calling in disappointment.