Flats Make Me Want To Ride 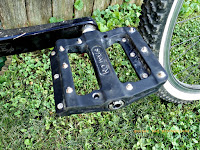 Every time I went down to grab a bike to commute on, I'd look at this one bike and think, "That would be fun to use as a commuter, but it has clipless pedals. Meh! I don't want to mess with shoes today!". Then I'd grab the Ti Muk 2, or the Surly 1 X 1, or lately, the Sawyer. All fun bicycles to ride that I have set up with flats.

This also figures heavily into which bicycles I choose to run errands on. Flats are best, since I can just hop on and go. No "special cycling gear" required at all. It's a barrier to riding if I have to stop, sit down, and switch out shoes just to ride a bicycle.

A couple things make me this way, perhaps. My best memories of riding when I was younger were on rides that required zero special gear. That means flat pedals. The other thing is that I don't like hassling with finding a set of shoes and then having to switch shoes both at work and at home. So, those things combined make me like just riding flats sometimes. Not all the time, but a lot of the time.

And maybe I would still use flat pedals in events and bigger rides if I didn't think the shoes were holding me back. Not that I have a problem with clipless- I don't, so I guess I just believe in the stories about how it is more efficient and I go clipless. I should just throw a set of flats in my truck. If I had flats that time I forgot my cycling shoes for the Prairie Burn, well...... Anyway.

Tuesday I looked at the Karate Monkey again and thought, "You know, I really should put flats on that bike." I wasn't going to ride it, and I had actually dragged up another bike to use that did have flats. Then I decided this madness had gone on long enough.

I took that bike back down, grabbed some flats, put the Karate Monkey in the work stand, and spun off those clipless pedals. Once they had been replaced with some old flats I have, I was set to cruise to work. Now......that's much better! Another choice for errands, commutes, and big deal if I go out on gravel with flat pedals. In fact, I not only commuted yesterday on the KM, but I also ran a quick errand with it.

Now, about the bike, for those who may not know this one. It was my first 29"er back in the Spring of 2003. Probably the first 29"er in the area, and maybe one of the first in Iowa. There weren't too many wagon wheelers around in '03! It's always been a single speed, and for most of its time with me, it has been a drop bar bike. I started out gravel grinding with this rig back in '05, it was my main commuter rig for four years, and went through four Winters. The Winter riding nearly killed the bike when my original bottom bracket, a 90's era UN-52, got frozen into the frame. The bike sat around unused for probably a good five years because of that problem. Fortunately, in 2016, I got that bottom bracket out.

I had planned on using that bike for the 2016 GTDRI, but those plans fell through, and another year went by. Finally, in February of 2017, I got the bike assembled in its final form. Then I rode it a few times and.......clipless pedals. So, I just decided this situation needed to change. This bike isn't going anywhere, as it was my first 29"er and I did my second longest ride ever on it back in 2006. I have ridden thousands of miles of gravel on this bike, commuted on it for years, and it has just got to be a rideable bike, not a garage queen. So, the flats are perfect.
Posted by Guitar Ted at 1:30 AM

Just do this. I know there's an up front investment but I LOVE my hybrid pedals for all but my dedicated MTB.
https://www.time-sport.com/int-en/time-sport-mtb-time-pedals/hybrid.html

I've got those Fyxation MP's on three bikes now. You can't beat'em for the price. I don't notice being any slower but it's hard to convince people. They have a lot of emotional capital as well as money tied up in their clipless systems. Plus they're afraid they might get the fish eye from their peers on the Sunday morning club run.

The Monkey looks great! I really like the green bar tape. At first I thought it was shellacked green cotton but on closer inspection it looks like something else.

@Phillip Cowan- Thanks! The tape was some Cinelli, or.....hmm.....Maybe it was something else. I am pretty sure it was that fake cork Cinelli stuff. Anyway, it was the only "right" colored green tape we could find at the time.

@Erin- Those look great, but...... You're asking me to completely switch over many bikes and pairs of shoes to Time. Uggh! Cannot imagine the cost just to give it a go.

Mr. Rogers does not approve of this one pair of shoes theory of yours... It's a beautiful day in the neighborhood, a beautiful day for a neighbor. Don't you want to be his neighbor?

Flat pedals and tubes, what's the world coming to??!?
(PS that was sarcasm, I'm in agreement!)

I went all flat pedals all the time a couple years ago and never looked back.

been flat pedals with no clips for years. Since I fell off into traffic on a missed shift on a steep hill in fact.

Oh yeah. Go simple! I do ride pretty much all clipless, because I do like it. And it works for me. But I'm pretty tired of all this new sparkly innovation crap. A suspension dropper post? Oh yeah, that'll work great on my carbon folding electric fat gravel bike! Argh. Let's just ride and have fun.

For quite a while I've been using clipless only on long rides, but then recently I did 250 miles/12K' over 3 days on flats and it was awesome. Probably going to phase out the clipless by attrition...