The Weekend That Was Postponed 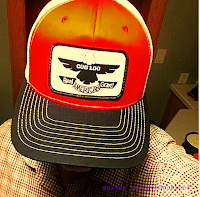 Okay, so I want to say up front that I know there are a LOT bigger issues out there than a postponed bicycle event. I get it, but instead of droning on about the obvious I wanted to divert our collective (read: "my" ) thoughts toward something to take our minds off of things for a brief moment.

That diversion would be talking about the weather we had Saturday, and a few other things, that took place when we had the C.O.G. 100 planned to happen. N.Y. Roll told me last week it was probably for the best that it wasn't going to happen, because at that time they were saying we would have severe thunderstorms in the morning hours. Thankfully, that never happened.

What did happen was that we got a typical soaking rain with about 50°F temperatures which would have made the roads pretty much just about as nice as last year's C.O.G.100 event, just with wetness. So, yeah, take away the crazy wind, (there still was plenty of wind though), add rain, and get the same amount of "suck". Ha! Anyway, it would have been quite the slog/mud-fest and we all would have been shivering, wet, and pretty miserable. You know- typical epic Spring gravel racing.

Oh! And later in the day we had a tornado warning here in Waterloo. May not have affected the event, but there was that too.....

So, if you've ever been in a situation like that, just close your eyes, remember it, and you'd be pretty close to what could have happened over the weekend. Or don't and be glad it never happened. Either way, a single speed would have been a perfect bike for those conditions.

Now, as for the solo #cog100  Yeah..... I postponed that, since things are on high alert in many areas and travel is discouraged in places where stay at home orders are in place. But that didn't stop some of our European brethren, and a couple of others, from riding. So, with names withheld to protect the innocent, I have some submissions to share. One of which is my favorite bike I've seen in quite awhile as far as gravel travel is concerned. I think many of you will agree...... (Guess which one!)


One of the German submissions came with a long, interesting story, which I cannot replicate here, but something he said about our current situation resonated with me. It is something that reminds us that this is a world-wide phenomenon. Not just affecting you- but all of humanity. Check it out:

"The actual situation feels like taking involuntary part in an bad b-movie written by an misanthrope and directed by a paranoid. There is no escape from the permanent announcing of danger! Time for a solo ride!"

That pretty much summed up how I have been feeling. And yes- isn't it great if you are able to 'get away' on a solo ride?

The person who submitted the story ended it on this fine note;

"Conclusion: Cycle more, consume less and shop locally. And keep an eye
on our rights that maintain our freedom!"

So, there were folks out and about that were thinking of the C.O.G.100 and that's pretty freakin' amazing, if you ask me. I sure hope that y'all got in great rides but stayed safe and all that. Hopefully this passes soon so we can all forget about "virtual group rides" and sharing via digital means. In the meantime, I hope this brought a little relief from the heaviness of today's world.
Posted by Guitar Ted at 1:30 AM

By this point everyone should know how to behave and what to do. I think we need more positivity. Share a good thought, a recipe, show some cool old photos, show how to fix something. That's my take on this.
take care,
ari

Thanks again for keeping us rolling! If possible I would buy a hat to wear this year! Not sure if this is possible? I don’t mind repaying for the next year or postponement of this race. I know a lot of work has been put into this!
Ride on! And peace!
Scotty “Kinggood”

GT, you and I meet once at an Ingawanis race, and one day we'll ride together.(I am Mike Johnson's brother in law.) A Des Moines tv station is looking for story ideas, and I submitted an email for then to get ahold of you about these phantom rides. I hope that you would feel good about some possible coverage of this largely underground cycling phenomenon. Not all athletes are under contract, passion is the pay day IMO.

@Kinggood - Hey, e-mail me at g.ted.productions@gmail.com with an address. I'll see what I can do.

@Gravelo - Oh, really? Was that up here at Ingawanis years ago? I had my son, who was about 4yrs old along with me at the time, if so.

I guess, the purple one.

All those bikes were beauties!

That would have been about the time. I believe you were at the South end of the course, spectating or maybe marshaling? If you want to reach out to the reporter it is Mark Fruend at whotv.com. All the best, Gravélo.