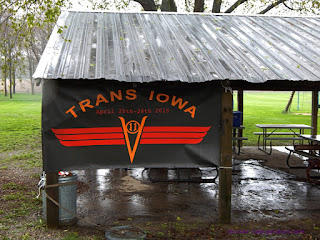 Well, what can I say? This one- Trans Iowa v11, it was the second shortest Trans Iowa ever. Only T.I.v2 was shorter in terms of miles covered by the riders. So, you'd think that there were not a whole lot of story lines coming out of this event. But of course, that is wrong thinking, because this particular Trans Iowa was so out of the ordinary that it stands out as being one of the 'best' Trans Iowa events for several reasons.

Oh, yeah.....the event sucked, if all you look at are the results viewed through the lens of a traditional look at gravel events and Trans Iowa in particular. However; due to the very reasons that the event was 'ruined' we ended up with opportunities to see extraordinary acts, to have fellowship unseen, and some stories which would never have happened otherwise.

Of course, it was an event dominated by an extreme Spring weather system which was unpredictable. The weather forecast was certainly not favorable, but it wasn't horrible either. The weathermen were calling for a quarter inch of rain throughout the day, grey, overcast skies, and winds out of the Southeast at a fairly good speed, but nothing we hadn't seen riders go through before. There were no real concerns about thunderstorms or lightning, and so I wasn't expecting a truncated event by any means.

That didn't mean that I wasn't concerned. I was. Very. I felt that this would be a Trans Iowa with very few finishers. One that saw a lot of attrition throughout the event. I knew that we had several very difficult Level B Maintenance roads which would severely test the ability of the riders to make the checkpoint cut-offs. There was one going to Checkpoint #1, a doozy of a Level B, with no real rideable options when it got wet. Then there were two out of the gate from Checkpoint #1 which would also be difficult to walk through and would be two miles of time consuming drudgery in the muck. Add clean-up time and you are already in the hurt locker for time. But that wasn't all....

So, before the event even got started, I knew that perhaps only a select few individuals would even make Checkpoint #2, let alone finish, and yes- there were more bad Level B's after Checkpoint #2. Would anyone be able to finish? Had we not seen the unforeseen weather, and it actually turned out as forecast, maybe one, two, maybe three people finish? It was going to be a lower number, a single digit total at best. Much like Trans Iowa v2, if you want to know. No one made the only cut-off time checkpoint that year, but that was early on into the gravel scene. Riders had more knowledge now, better equipped physically and mentally. There was a chance.

So, when the weather went to Hell in a hand basket, well, that made things even worse. There was an intense situation developing since the weather now was putting everyone at risk. At risk of not only missing the Checkpoint #1 cut-off, but at risk of their very lives being lost. We waited at the checkpoint with the clock ticking down to the final minutes before the event would possibly end. It was surreal.

One guy made the first checkpoint with five minutes to spare.

Next: A Good Plan Goes Wrong

There was no clothing or equipment at that time, today, or in the future to keep a rider dry and warm. That morning was just impossible. I remember riding back to Grinnell fighting hypothermia the whole time.

@Skidmark - That's a great question. Yes- It was a chore to figure it out because every course was different. So, I had to figure out what an average walking time for a semi-muddy Level B Road was. (Based that on observations and my own testing) I had to figure in how hills may affect the time, or not if it was flatt-ish. I always gauged times to the first checkpoint a bit more harshly since my observations were that this checkpoint was reached more quickly, (and that due to reasons I'll get to later), and often I was too lax, in retrospect. But yes- It was a tough balancing act.

Weather was the wildcard. It could make or break any of my plans for cut off times, and since I found that trying to make a timing change during an event was a complete disaster, (T.I.v1), I decided just to live with my pre-determined times. That seemed to be the way that riders liked it too, so in the end, I feel that it was the correct way to go.

That picture is amazing. I printed it out, and still have it tacked to the wall of my office cubicle.

Maybe I should print out a copy for my home office as well, since I’ve been working from home for a year l.

@Mac - That is an iconic image. Interesting story: I happened to be standing right there as Jason Boucher took that image. Immediately after pushing the shutter button he stood straight up and said, "That's it! That's the money shot!"

He and Wally shared a joyous moment there after that. As photographers they knew when a shot was a winner and I will never forget Jason's satisfaction which he showed there. It was a great moment.

I don't blame you a bit for admiring that image. One of the best ever from a Trans Iowa.

Sitting in Fuller's car warming up with other droppees, going out to eat that afternoon, hanging in the hotel for the rest of the day with friends waiting for reports on Greg, it might have been the most fun I had at any TI.