A Look At A Decade Of Riding The Black Mountain Cycles "Monster Cross":

Long time blog readers know that this is the bike I got in lieu of having a custom gravel bike frame and fork made back then. There were no 'gravel bikes' at the time, just bicycles repurposed for that pursuit. In my mind, the BMC was closer to my ideals at the time than anything else I could get. I'll get around to what the deal was in 2011, because things were far different then than they are now. Decisions I made then were based on what could be had easily, not on pipe dreams, so I made several compromises, but those things are not necessary these days. This will play into my final verdict on this bike, obviously.

I will also have a pictorial history of this bike and the changes it went through over the years. It started out as more of a true "Monster Cross" rig, single speed, and with the rare Luxy Bars, then it morphed into a geared bike, and then almost a rando bike before returning to a single speed again.

I could go on and on about this bike, but I will try to make this as brief as I can. Before I go any further here, I should point out that some geometry tweaks were made to the Monster Cross model a few years after I received mine, so current Monster Cross bikes are a bit different. So, keep that in mind when I comment on this bike, especially when it comes to bottom bracket height. Okay, now on with the review....

The scene in late 2010/early 2011 was pretty much lacking in anything 'gravel'. In fact, anything you used on gravel for........well, gravel riding, was begged, borrowed, and stolen from other forms of cycling. Mainly from cyclo-cross. Those bikes had bigger than road bike tire clearances but were close enough to road bike sensibilities that they made more sense on gravel than hard tail mountain bikes, which at this point were mostly 29"ers. Those were okay, but cyclo-cross bikes were lighter and you had a much more aero position on them than you did on most 29"ers.

So, the bike that came closest to my ideals of what a gravel road bike should be was the Black Mountain Cycles Monster Cross bike. It had the promise of large tire clearances, a slightly slacker geometry, and the only thing I was dismayed by was the bottom bracket height. It was pretty high for what I wanted, but I gave it a go anyway.

The first incarnation of my Orange Crush was as a single speed set up with 2.0" 29"er tires set up on impossibly skinny Shimano Sante' hubbed, Matrix rimmed wheels from the 80's. Brakes were old STX cantilevers and the brake levers were shimano SLR aero levers from the late 90's. I was pretty much smitten with the bike immediately since this bike took over gravel duties from my Karate Monkey 29"er.

After a while I ended up gearing this bike up with a non-series Shimano two piece Hollowgram crankset, Ultegra 9 speed rear derailleur and shifters, and a SLX top pull front derailleur with a new set of Velocity A-23 wheels and Bontrager XR-1 tires. (BEST big volume gravel tires I've ever used- sadly long out of production) I also swapped handle bars to the then new Salsa Cowbells.

In this configuration I found that this bike worked very well but I started to experience some things I did not like much, especially going fast on loose gravel. Yep.....high bottom bracket. I also came to dislike the "Gnot Rite" drop out spacing which was a royal pain when swapping in the rear wheel. I ended up cold setting the rear triangle so I never had to deal with that again. (Note- I believe this also was a running change with the Monster Cross model, so it should not be a concern anymore.)

Several rapid fire changes then happened which brought the Orange Crush to a state in which it stayed for many years. I got a cool front bag to test out for my gravel riding site, (Sadly- it is no longer made, so don't ask.) This brought the need for a front rack, so that got installed along with some Planet Bike Freddy Fenders. Now it looked almost like a rando bike!

In this form I enjoyed many long rides and I tested a lot of tires on this rig. The high bottom bracket wasn't a big concern for me on flatter terrain, and by this time, I had a proper gravel bike in the Raleigh Tamland, which was pretty much made to my spec. So, I didn't see the BMC as my primary gravel rig anymore. It was decent, but it wasn't great, like the Tamland was/is.

The Orange Crush got pushed back to being mostly a Winter hack and test bed for RidingGravel.com. I fitted Planet Bike Cascadia ALX fenders and somewhere along the way it got a set of Tektro cantilever brakes which replaced the old SLX cantilevers. I also got another wheel set from HED Wheels to switch out with the Velocity A-23's. Finally, in 2019 I got back to single speed mode, setting the bike up with 180mm cranks.

Final Thoughts: The Monster Cross model was a gateway to gravel in 2011. However; since those days what is this bike now? In my mind, it is a bike that at once is old school (cantilever brakes, steel fork, QR drop outs) and modern (fat tire capabilities, slacker geometry), so it is a bit of a conundrum. It isn't what you'd get for fast gravel racing, but it won't let you down if you do. Modern Monster Cross frames have a much more gravel friendly bottom bracket height and a few other nice tweaks over what I've got here, (that new fork is super cool), so what I have to say about mine maybe isn't really relatable today.

Bike packing? Well, it isn't set with all the accessory warts that you'd maybe expect with such a bike, nor does it have a lot of bottle mounts. No- maybe light touring. The bike really is a simple machine that is for 'under-biking', pseudo- MTB, and just goofing off in the country on. It will launch over the logs, deal with uneven terrain, and -yes- it will gravel all day long too. I like it single speed best in comparison to my geared bikes, but then again, I like single speeds. So there is that.

I maybe should have gotten a newer Monster Cross bike, so I could experience the differences between this one of mine and the newer models, but that would be an exercise in frivolity that I can not really afford at this point. So, take this review with a grain of salt. I like my Orange Crush. We've had some stellar times together. She ain't perfect but it's alright. We get along just fine and I suspect we'll have many more great rides in the future.

Note: I bought this bike with my own damn money and was not paid, nor bribed, to give my thoughts on it. So there!

Greets GT, just so you know we’re paying attention to our history lessons- what were the first canti brakes on the Orange Crush. You said SLX but prolly meant ???, STX, LX?

Based partly on your review (and partly because I missed the skinny steel ride quality) I bought one of Mike's green 'modern' monstercross framesets a couple years ago. This one has the biplane crown, lower BB, and 135mm spacing. If this exact bike had disc brakes (or I lived where 30 minute terminal velocity descents weren't typical) it'd be perfect. The ride quality is sublime and the handling is very balanced. I fixed the fiddly braking with some Paul Minimotos, but can't run much fender with them which I miss during our freeze/thaw/mud winters.

@Skidmark - You are correct! It was STX. Thanks for catching that.

@Blain - Yeah, I figured the newer ones were nicer! 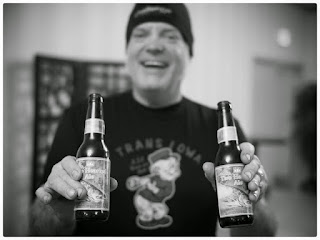