Well, That Was Fun! 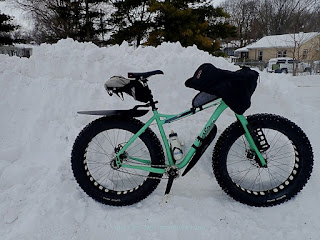 The first day above 32°F happened on Monday of this week and we are to be well above freezing for several days now. With the Sun riding high in the sky now, and longer days on tap, it won't be long before we are done fat biking in the snow. Maybe even now the trails are too far gone for it. It was fun while it lasted.

The only thing I regret is that for about two weeks straight fat biking conditions were primo but the temperatures were beastly. And many of those days it was just far too windy to cope. I even had to break out my ATV pogies for that time as it was too good not to go out but too windy not to have pogies.

Side note: These cheapo ATV pogies, (purchased at a local Farm & Fleet store for around 20 bucks) are perfect for Jones Bars. Plus, they go up to about your elbows. I like that when the conditions call for that. They are also super easy to take off and put back on again, require no fancy end plug gizmos, and have internal chemical heat pockets in case you are insane and want to ride in an apocalyptic snow storm or something. Anyway......

So, yeah, what fat biking on snow I got to do was fantastic and the fat bike season of 2020/2021 was pretty top notch, I'd say. The snow actually was of the variety that it had consistency, not the generally 'sandy' type snow which we get a lot of here anymore that makes riding on snow impossible no matter how wide the tires are. I liken that type of snow to hour glass sand. Super fine, granular, and will not hold together for anything. Basically worthless for fat biking on. Fortunately this season had none of that type of snow at all.

But now we are watching that snow we did get turn to water and drain away. It is now full-on "Slop Season". That period of time between good, rideable snow and dry-ish roads and trails leading into Spring. A messy, ugly time where getting on the road, or as in my case, gravel road, is often difficult due to refrozen run-off, sand from road treatment, and soft roads in the country. But I am armed with fenders and wider tires.

Do those pogies feature any sort of attachment for the bar end? The cheap ones I have seen don't have a bar end attachment point, which does not work well. I've added a simple attachment feature by stringing some shock cord loops through them.

@ Jon BALER - No they do not and I find anything else completely unnecessary for good operation. It is rare that I ever use pogies like this at all, (exception being the Pogie Lites from Bike Iowa), and for 20 bucks these couldn't be better, in my opinion.

I assume you want your pogies to 'face up' for ease of ingress and egress? If that is the case, these are not for you. I do not find that to be a positive feature that I want in a pogie. All I want is warmth. These give that and are easy to put on and take off the bike.

I hear ya about the primo fatbike season... It was super good here too. I wish I could’ve gotten out more.

We’re preparing for MW’s monthly hundy on Saturday. It’ll be a great day, but yeah, fenders and fat tires are gonna rule the day. Fortunately, I’m well equipped there.

@MG - This weekend is going to be an adventure for you guys! All the best to you and MW and all the rest! I hope it goes well for all of you.

Holy buckets, Batman! That's what those pockets in there are for, I honestly wondered for years what that was all about.