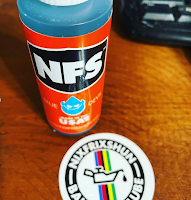 NOTICE:  The Guitar Ted 'Lube-Off' is a comparison of different lubrication products for bicycle chains that is undertaken in 'real world' conditions in a set way. Then I compare and contrast the results with past 'Lube-Off' products to see "which one is best for me". This is done for entertainment purposes and the reader should apply their own reasoning and discernment while reading my 'Lube-Off' entries. What works for me may not work for you at all.

These articles are done with no support from any bicycle entity unless where noted. All the lubricants in this round were purchased by me and I am not being paid, nor bribed for these posts. Now, please read that and understand that before commenting.

Now, on with my latest findings! I decided that since I was limiting the test to six hours of actual road riding on crushed rock or dirt roads during the last round of testing, that I would continue on with that format this time. The first lubricant used for at least six hours has been the NixFrixShun Blue Devil product.

As you may recall, this was applied to a new chain, per NixFrixShun's instructions, and then I have ridden this bike with this lubricant now for just past the six hour time check. So, with that, lets' take a look at what I have found.

Here we have residue, but it is mostly along the edges of the side plates. The lubricant also left a darkened color on the cassette cogs it ran on. I did not detect any 'gunk' build-up on the jockey wheels of the derailleur either. The rollers themselves seem to be free from any dirt, dust, or build-up of lubricant/dirt/dust combinations.

Let's see what the 'Touch-Test' shows. 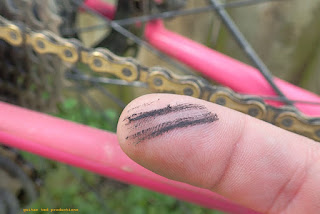 So, as I suspected, this is just build-up along the edges of the side plates. I'm not going to condemn the Blue Devil lubricant for that. However; the top dogs in my long running 'Lube-Off' tests- DuMomde Tech and Muc-Off C3 Ceramic Dry Lube- do not seem to do this much, or at all. They also tend not to leave a discoloration on my cassette cogs. So, in that I still hold those two lubricants as better than this NixFrixShun lube. That's just my take on things so far here.

But I do like how this Blue Devil lubricant has affected shifting, which is positively, and there is zero grittiness on the drive train bits, so that is impressive. It just is not as clean as the others. That said, I plan on sticking with this lubricant and seeing how long I can run it before it needs reapplying. I've a feeling that this lubricant will run quite a while.

It also bears noting that this is not necessarily just a dry lube. NixFrixShun claims it is an extreme conditions lubricant, and so I might give this a bit of grace when it comes to leaving some residue behind as it does not necessarily claim to run super-clean. While running it in the wetter conditions might prove interesting, I am going to stick to dry conditions riding as much as possible for this test. Maybe I'll run this later in the year in a "wet" edition of the 'Lube-Off'.

So for now, no.....this is not going to be top-dog in my testing, but it is intriguing enough that I want to keep going with it to find out more, if I can. I'll likely run this until it either gives up the ghost and needs reapplying, or if I get annoyed by the dirt accumulation.

I'll also have an update on the other lubricant in the test soon.

Greets GT, please be sure to tell us how they smell (the lubes). Very important ya know.

@Skidmark - Will do! I will say none of these is as aromatic as DuMonde Tech is!

My experience with NFS is similar - not the cleanest lube, but very quiet drivetrain that shifts much better after application. It's a tradeoff I've been willing to make.