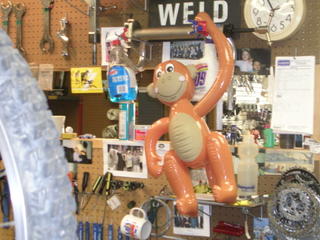 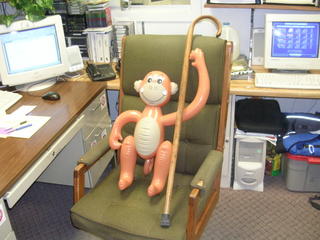 Well, as you can see, I managed to get the digi-cam pryed from the hairy brown mits of our Overlord of the past few days. At his first appearing, you can see in the upper photo where he was crushing the Man of Steel into a pint sized joke! This he did in order that he might show his superiority, and then came the demands! Well, needless to say, we had to go into "damage control" mode. We ushered Monkeytron into the oft vacant office of Leans on Wood, and told him to assume the role of our leader. We motioned that he should sit in the "Throne of Power", and take up the "Scepter of Sabaceous Secretions". After ensconcing him in the royal posistion, he was content to pronounce several maledictions, and inevitably became an instant meglo-maniac. Perfect! Now we could twist things to make it seem that what we wanted was his idea! It was only after several small steps, and very patient handling that we were able to actually convince Monkeytron to give up. Of course, Jeff's bananas were quite helpful!

Now, Monkeytron has become our friend. We have convinced him to become the Europa Crash Test Pilot! Look for him doing QC on Jeff's 24hr rigs in tomorrows post!
Posted by Guitar Ted at 5:31 PM