I'm Somwhere, Out There! 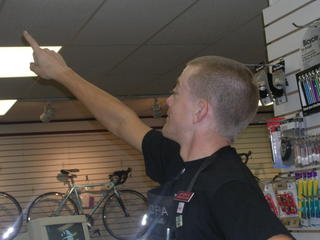 Mr.24 is now airbourne! He is taking his first plane ride today! He was pretty excited last night at the shop. I hope he doesn't get too much turbulence going over the Rockies! That can be a bit bumpy.

Just saw some of the pics from the On Dirt Demo. Nothing really earth shattering.......yet!
But I'm keeping my eyes peeled for some cool stuff. Generally, the whizbang, neeto schtuff doesn't really get shown, or discussed until the actuall show starts, tomorrow. Stay Tuned!

Look for a report on the "Mondays With Mark" class this afternoon, along with any Interbike reports worth mentioning! OUT!
Posted by Guitar Ted at 7:48 AM