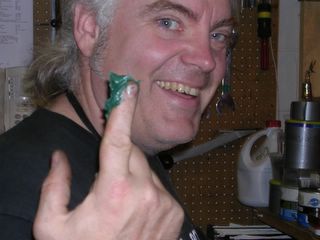 Today, I introduce a new feature. This is reserved for places, people, or things that are not right, messed up, or totally wrong according to me, Guitar Ted! You are certainly welcome to agree, or to convince me otherwise with a well reasoned, pithy retort. So, without further adieu, here is the first recipient of The Greasey Finger!

It actually is two people, and an organization! Dick Pound, Hein Verbruggen, and the UCI get the GF for the colossal mess they have made concerning the Lance Armstrong vs. L'Equipe' affair. It appears more and more that the individuals and the organization in question have worked in tandem to confuse, obfiscate, and cover up the dirty dealings involved in the releasing of sensitive, secret information and it's linkage to use of EPO in the 1999 Tour d'France. Instead of shining a light on the wrong doings, they have resorted to finger pointing, and accusatory statements that further thier precipitous slide into public relations hell.

Okay, you may disagree on some points, but as always, you are welcome to comment! Have at it! It must be noted that the picture for Greasey Finger Friday was taken by Mr. 24, and yes, that really is me! It's not often that I'm not behind the camera!
Posted by Guitar Ted at 7:11 AM