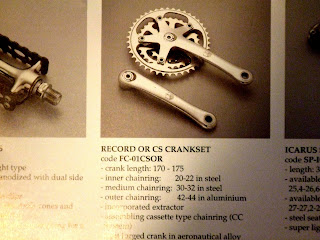 I posted a story on these cranks on Twenty Nine Inches because of the hue and cry I have seen over the last couple of years regarding the "gearing discrepancy" between 26"ers and 29"ers. Other than to say That I think the Campy Record OR crank set was awesome, I'm not going to get into the details of this lost gem.

I'll just chime in here to say that I don't quite understand the 20-30-42 crank set that folks want on their 29"ers. I know some will swear that it is totally necessary, and I wouldn't begrudge them having a choice in that regard, but I just do not think it is necessary for all 29"er crank sets or that it is a "29"er specific" problem.

I have ridden a 20T granny on a 26"er with a low cog out back of 32T. A rediculously low gear that I could never hook up with. Way too much torque and quite honestly, barely faster than walking. In the situation "required" for using such a low gear, I would probably be walking no matter what. Also, I have ridden a mountain in Colorado, Vail mountain to be exact, where the switchbacked climb was counted in miles. Yes, I was using a granny gear, but it was a "standard" crank with a 24T low. Yes, I was barely going faster than I could walk, but I figure that it was more me and not so much the bike. More me as in fat me, outta shape me, never had ridden in Colorado before me. Get the picture?

To add to this, I have also ridden HWY 16 west out of Rapid City, SD on a loaded touring bike that weighed so much with all it's gear I could barely lift it up. Gearing? Campy Icarus crankset (26Tgranny) with a 28T low gear out back. Yes, I was in granny for , what is that climb, like five miles? I was clipping along fairly well, as I recall. I had about five days of riding that rig at 100 miles average a day under my belt. A bit better shape than I was in at Vail. Anyway, it worked well, never wanted a lower gear.

So, I'm not really convinced that 29"ers need lower geared cranksets. I am convinced that certain people do. Whatever wheel size they ride on. That crank idea from Campy is a good one and something like it should be available so you can run low, low gears.

It just isn't a 29"er specific problem though.