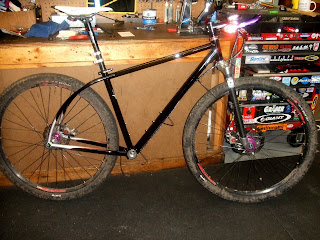 <====The Of Spirit Blackbuck in "bicycle form"

I was able to start the transfer of parts over from my old single speed race frame to the OS Bikes Blackbuck yesterday. It looks pretty nice so far, I think.

I wanted to get it dialed in position-wise as close to the old set up as I can get, ( which looks like it will be easy to do) before I start tweaking with the different forks and what not. This is the Superlight Carbon fork from On One that is on it now. I will derive a "baseline" of handling from this point, since it should be the most similar to the old bike. Then after I get a handle on this set up, I'll start the mad scientist fork swapping.

A couple of tech notes, for those curious about such things: The Avid BB-7 calipers fit fine on the chain stay. No interference with the actuation arm of the caliper. Also, the frame with seat collar and EBB installed weighed 5.6lbs. I figure the completed bike should weigh in at about 25-26lbs when I'm finished. I could cut that down with a different bar/stem combo. (That is in the plans as of now. Salsa carbon bar and a Salsa stem are on the radar)

As for racing this beast, I have already committed to doing the Dirty Kanza 200 on May 31st. There are still spots open to get on board with this long gravel grinder, and I recommend it highly! Good times! Many Iowans are already on the list and several other well known area enduro-freaks are too. Anyway, that will be the first real test of the rig planned so far in terms of racing conditions. I may find another local event before that to test the waters. We'll see.

Of course, it will be getting ridden for the fork tests all along. Also on the radar is the 24 Hours of Seven Oaks which will see the re-appearance of Team Stoopid. The all rigid, all single speed team of four that won their category at the event last year. Now all I have to do is to convince the team leader to acquire a set of adult wheels for the campaign. It'll help keep him upright, I think.

More on the racing scene as it becomes pertinent. 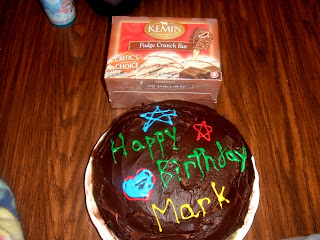 <====Not normally found on my training table!

Had a little celebration last night and I wanted to say Thanks!

Having my little ones sing "Happy Birtday" to me was the best present I could get.