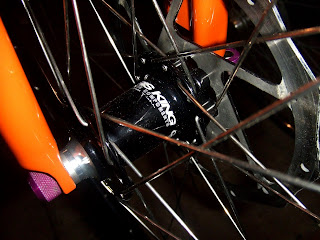 So the weather man was right and the temps were in the single digits with a howling Northwest wind putting the windchill way below zero. Nope! I wasn't going to go riding and risk dragging myself into another New Years Day sickness like last year. (Although I heard some local 29"er freak did actually ride yesterday) 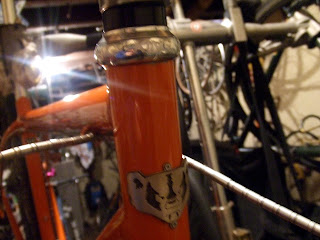 <===See, I told ya so! A King head set over a sterling silver Jen Green "head badger".

I opted for spending one last day off with my family and puttering around The Lab tinkering with the components for the Badger off and on during the day. 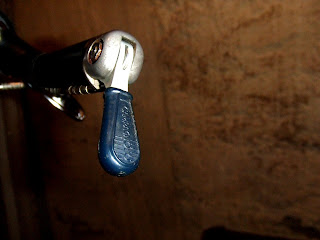 <===Campy bar end shifters. Yes, friction only! These have seen duty on thousands of road miles on board an old mountain bike converted to touring use.

Some of the older components were in need of some serious "TLC". I took my time getting them functional, but not spit polishing them since this is a mountain bike/gravel grinder after all. 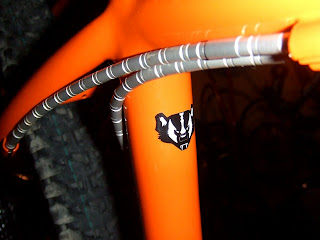 <===Mr. 24 is responsible for downloading these cable housings to me. Thanks Buddy!

I figure the patina gives the bike an automatic license to be used as intended instead of feeling the guilt of getting stuff trashed that I just put a lot of elbow grease into getting it all "purty" and such. 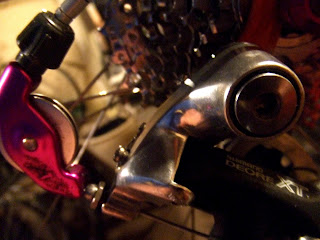 I'm using some stuff I know will work and a couple of items that are purple, well.........because they are purple! I love the color and after seeing my old Curve titanium purple ano skewers on this rig, I thought a little bit here and there would be kind of cool. FYI: The rear derailleur also sports some blue anodized "Shift Biscuits". Anybody remember those? Yeah, I raided the old parts stash again. Thing is, I'm plumbing the depths of what there is left. I doubt I'll ever be trotting out anymore old 90's stuff anymore since I'll be using almost all that is left on this project.

Looking at acquiring some brakes in the near future and then some silver braided Jagwire brake housing to finish it off with. Maybe in the meantime I can score that silver Origin 8 Gary Bar too. That would be super cool.

Well, that's what I did on a cold, cold January 1st. I'll post another update on the Badger when I get some more stuff installed.
Posted by Guitar Ted at 6:44 AM