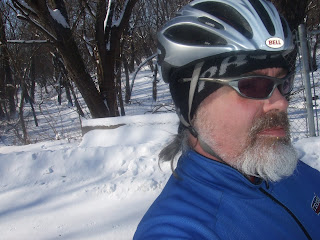 Finally, after several days of weather unfit for man or beast we got a nice day. I didn't hesitate to grab my bike and ride.

The plan was to get in about two to three hours worth of base level riding. So I tooled around town for a bit.

<===I was super stoked to be riding outside. There's a smile there, you just can't see it. My face was frozen!

At the start it was 15 degrees Fahrenheit and the wind was out of the west-Northwest at about 20-25mph. Yeah.........windchill! I made my way over to the Greenbrier district of Waterloo, over onto Wagner Road, and turned onto Diagonal Road. Before I got there I had to battle a bunch of car snow plowed up onto the sidewalk along Conger. Slow going!

Anyway, once past Diagonal, I turned west on Airline Highway and straight into the wind. Yikes! It was super cold and a slow grind. I was trying to keep things low on the effort and just spin it. I was successful, but it took awhile to get to the turn off to Aikey's dump/car salvage/death yard.

Funny how people get bent because you are riding a bike. I had a guy waving his arms wildly, ( yes....both of them. No hands at 35mph.....nice!) gesturing at me as if I was violating some cosmic law because I was riding my bike in January. Whatever dude!

So, I got into the Big Woods Road area and found that the bike path was cleared at some point, so I made a rest stop there before continuing. By this time the temperature was rising and I could tell. I wasn't freezing anymore since I wasn't shivering when I stopped. I remounted after some photos and hit the trail back home. 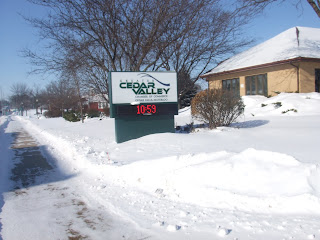 <===The Blue Colnago gets his temperature shots here, I think. No temp on the sign today, but another sign not far off said 23 degrees.

So I wandered around the back roads going towards Waterloo and made it home in time for some lunch. (Good timing, huh?) It was a great day on the bike, especially so since I hadn't ridden in over a week. The roads were getting a bit messy by the time I got home and I was glad I was off the slush. Two hours and twenty minutes of ride time. Yeah, that'll work. 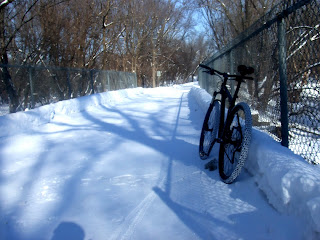 <===Normally there is a lot of traffic out this way. The bitter cold chased folks off all last week. Not many tracks out here except those of the ever present deer.

I rode the Diamondback Overdrive on this ride. It is a really decent rig for the money that I am testing/reviewing for Twenty Nine Inches. I also am testing a new (to me) lube on the chain of this bike which so far has been fairly impressive. I will be detailing that in another round of the Guitar Ted Lube-Off coming soon.

I hope to be getting back to commuting again here. Miss that ride! Driving cars isn't my gig so much. Let's hope this super bitter cold leaves us alone for the rest of the winter!
Posted by Guitar Ted at 10:00 AM