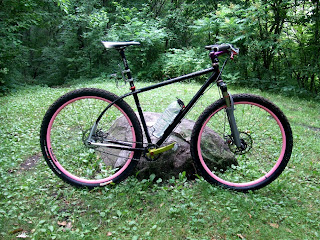 Okay, this is a mega-packed post today. Sit back and grab yer coffee!

I rode my Blackbuck at Cedar bend yesterday since it was the only place that was ready to ride after our recent deluge within a reasonable driving distance. Still, it was pretty greasy in spots and sure enough, I had a right hand off camber after a down hill that sent me sprawling. 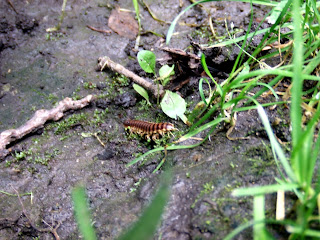 I came to a halt with my nose about three inches from the critter you see in the pic on the left here. The critter was not amused, and quickly scurried away from me, but not before I captured its image for you all here!

I did some damage to my right hamstring in the wreck, and I cramped, or nearly cramped the rest of the ride. It was painful, but at least I was riding. The single speedness of my Blackbuck surely didn't help, but I wasn't about to turn around and go home just yet!


Mike Curiak Nominated To The Mountain Bike Hall Of Fame: Okay, on behalf of Mr. Curiak, I am making this announcement that he is up for a vote to get in the Mountain Bike Hall of Fame. I helped craft his nomination write up, which is in the list here for you to look at. Just click on Mike's name to read it.

If you think Mike is worthy, you can vote for him, but it'll cost ya! $20.00 to be exact. That said, that $20.00 helps keep the Hall running and will let you have a chance to vote in Mike. But hurry! As in all good things, this comes to an end on July 15th, so hurry!

Ellsworth Bikes to do a carbon hard tail 29"er: In my poking around on the web, I came across an announcement for Ellsworth Bikes carbon 26"er hard tail rig. So I read it, and sure enough, a 29"er is also in the works. No word on whether it'll be a U.S. made product, like Ellsworth is proud of. I'm betting it won't be.

Shed Fire Does A Off Road Drop Bar: Okay, the cat is out of the bag. Brant Richards, formerly of On One and now running his own outfit called Shed Fire has done up another off road drop bar. 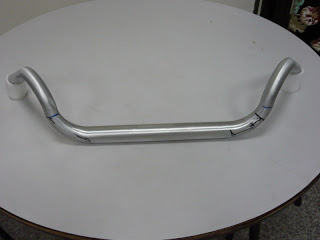 <=====Shows the flare from the front, albeit upside down! 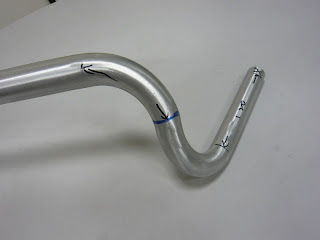 <====That's some sweep there on that drop section folks! 120 degrees from the bar top. 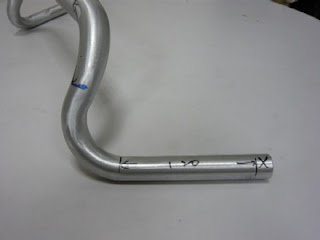 <===A longer drop extension with little reach. You do not like how long it is? Cut it off! It's hard to add to a bar that's too short to begin with here. 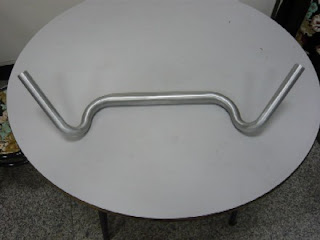 <===A look from underneath. The center section is 31.8mm all the way across to each drop section. It'll take road controls, of course. 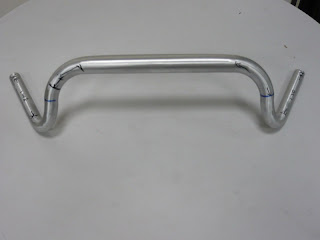 <====And one from the top. Note that the drops don't slope out a lot, so your brake levers won't be slanted too badly. Should please those who insist on using the hoods while they ride.


Okay, I have to admit that I helped out with this one. Brant had me do a rendering and picked my brain a bit about this, as I am sure he did with several other drop bar aficionados. At any rate, I am hoping he will also make this available in different widths, but at this time the outer width will be 580mm/23 inches or so.
This is the rough prototype, so much can change, but I think Brant is pleased with it so far and this likely will be close to production shape. No word on when it'll be out, or for how much moolah it'll sell for, so don't ask me!
And the name? Brant calls it the Luxy Bar. I like the factories numerical designation- "D62". Kind of reminds me of Allis Chalmers model designations for its orange tractors from back in the day!
Okay, that's it for Thursday!
Posted by Guitar Ted at 1:00 AM