Musings On The Name 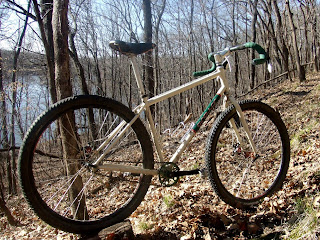 Mountain Bike: The name conjures up some of your favorite memories on a bicycle, or maybe it brings to mind a certain favorite bicycle you had, perhaps your first good mountain bike. Perhaps it makes you think of riding your favorite trails. Whatever that "name" does for you, that's a personal thing. I was just wondering if it is the right name for what we are doing.

Think about it: A large part of North America, (or the world, for that matter), is not mountainous. Experts seem to think the percentage is about 23-25% of the earth's surface is mountainous, and of course, most of the world's population doesn't live on a mountain. So, if you are not riding on a mountain, are you a "mountain biker"? I dunno. My feeling is that we got the name all wrong for this activity in the first place. 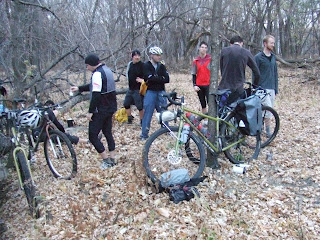 <==What the heck are these guys doing if it isn't being done on a mountain?

A long, long time ago, if you went off-road on a purpose built machine for the job, you would very possibly be on a "Mountain Bike" brand bicycle. Yep! That's right, the name coined by some mechanic some where for the new crop of off road bicycles was used as a brand name by Charlie Kelly and Gary Fisher to sell frames and forks brazed by Tom Ritchey and assembled by Kelly/Fisher. Everything else was, well.......something else!

Like many things in this culture, folks caught on to the imagery that "mountain bike" conjured up in their minds and pretty soon, "Mountain Bike" became "mountain bike" as we now know it. I should add that many early companies called their off road bikes "All Terrain Bikes", which if you stop to think about it, makes a heck of a lot more sense than "mountain bike" does for all the types of bicycles we think of as "mountain bikes".

But who am I kidding? The whole idea that the name is wrong and should be changed is like tilting at windmills. It ain't-a-gonna happen! But that doesn't stop me from thinking that maybe it should be changed.

Have a great weekend ya'all!
Posted by Guitar Ted at 1:00 AM

The French, who usually apply a bit of logic when inventing French versions of new English terms, call them a Velo Tous Terrains (VTT) - or "all terrain bike".

I just wanted to say that anybody who loves bikes and references Don Quixote is like, cool with me.

I just call it all off-road cycling. It is what it is...

Given that the majority of my rides contain at some point:
Clay Mud roads
Gravel farm paths
Running trails in Duke Forest
Ditches encountered when chasing after deer or wood chucks
Badly neglected chip and seal
and maybe some asphalt....

I just call it all cycling!

But in the end, you can not find anything near as appealing/romantic/heroic/daring/epic/alluring ... as "mountain" biking for mountain biking. A great image.
John

@john: Well, whatever trips yer trigger there, but like I said, most of the time you are not riding on a mountain. (And I happen to know where you ride)

I would also submit that it is all of those things you mentioned that get off road cyclists in hot water with other trail users, since that is the image they get when the term "mountain biking" is used too.

But that's another debate.....