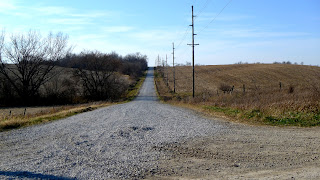 Man! All this talk lately of gravel races, registrations, and combined with how cold and snowy it has been has me thinking more and more about grinding up some gravel under a blue sky in the Iowa countryside.

Well, that could be done now, but it is awfully cold out there for anything very long, and of course, these days, gearing up to ride and taking it off at the end takes as long as the ride itself! Still, I need to get out there. CIRREM is just around the corner, and I want to get that ride in, if possible. 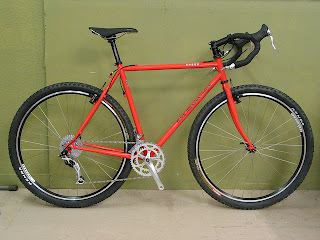 Mike Varley, of Black Mountain Cycles, posted this pic of the BMC frame/fork combo mounted up with Kenda Karma 1.9"ers!  That's awesome news. That means that I won't be sacrificing anything to not having gone with the Presidio, since that was the main feature of that bike I found attractive, besides the complete build spec.

Not  that I would run that big of a tire, but I could, which makes the frame/fork that much more appealing. In fact, I will be running some older IRC tires, 42mm, that I have been sitting on for some time. These will fit easily, and they are kind of heavy and tough, so they will make for some good training tires. Eventually, I will be going to a different, undisclosed as of now, wheel set, which I will use for actual events. I've got something in the works in that regard, so I'm holding back until all the details are worked out and I feel confident in announcing that.

Until then, I have a few wheel sets to "use up" in the Lab that I have collected for various reasons. Cast offs, or stuff that came with other deals. I'll most likely train on some 80's era Shimano Sante' hubbed wheels with Matrix rims, barely used. If the wheels have 50 miles on them, I'd be surprised. Better fix that, eh?

Well, here's lookin' forward to some gravel grindin' good times in 2011.
Posted by Guitar Ted at 1:00 AM

Don't you still have some old tubulars with a Syncros front hub laying around?

@Captain Bob: Sure do. Just looked at them again too. Not sure I'd do a tuby, but they are a possibility.