And The Winner Is.... Well, it didn't take long yesterday to make a decision on which frame to base my gravel grinder on for now. 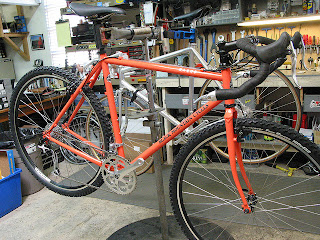 The Black Mountain Cycles "Monster-Cross" will be the sled of choice. I got a lot of comments on this particular frame and fork, and since not everyone reads the comments, I thought I would toss out some kernels from that discussion here.

The thought that it was "cool to get the niche brand" was certainly an appealing factor here, but not just the only one. Mike Varley is a smart designer, and he has learned a thing or three about bikes over his tenure in the cycling industry. Mike was the guy behind the original Haro Mary 29"ers, and he also did the design on Masi's cross bikes, as well as a lot of other rigs, so there is that pedigree behind the BMC stuff. It isn't like some ol' shop owner just had some "catalog" frame branded with his logo, or something. I have some high expectations for this bike, but that said, it will be cool that only 50 of these are going to be out there. (For now, anyway)

Other considerations were the taller head tube, the slightly longer chain stays, and the bigger tire clearances. My parts should swap over very well, for the most part, and they will get used. I really have had a hard time looking at the bike the parts are on just hanging there on the hook all these years, being neglected. Not good.

I'll have more to say about the frame and fork later on, but for now I want it to be understood that the custom ultimate gravel bike is still on the radar. This won't replace that idea, but will be in addition to that. Eventually, I have a plan for a single speed version of this BMC frame, so stay tuned for that.

That Circus Of A Race In July is in the news again. For only the second time ever, and the second time in five years, a rider is being stripped of his Tour de France title. I won't bother to link to anything here, it's all over the cycling press today. Of course, we all knew this was coming ever since the tainted beef story came out months ago. Now that the gloves are off, and the suspension has been announced, the real question is that of Contador's character.

He has repeatedly said that he would quit cycling and walk away if the allegations against him turned out to result in a suspension. However; he signed a lucrative contract with a new team in the meantime, and it would be hard to believe that he could walk away from that if some sort of plan could be concocted to keep him on the payroll through the reported one year ban. Many athletes claim the high road only to waffle later on. I'm thinking Contador will return.

If he does, it will only add to the "clown-like" nature of this cycling-circus called The Tour de France. Hey! I've got an idea! Let's just call it what it is: The Tour de Fraud.

And In Other UCI News: The ongoing story on the possibility of the UCI requiring a frame certification for road and time trial bikes, (which I wrote about here), and was postponed by the UCI until further review could be done, is being more clearly discussed. In a newspeice by "Bike Europe" it is being reported that the UCI was taken aback by the realization that a lot of frames would be submitted for testing. To quote the article:

"Apparently the UCI miscalculated the number of frames that would be brought forward by the industry. In particular as the International Cycling Union plans to test all frame sizes and all frame variations."


And with a 12,000 Swiss Franc fee for each carbon fiber frame, that's a lot of coin, time, and trouble- potentially. Think that might raise the costs of bicycles just a little bit? I think so. So do 45 other cycling companies, which are listed at the end of the "Bike Europe" article linked above.

Contador said he would quit if he got a two year suspension. This one year thing is an odd concept. We shall see....

Very cool bike and concept. Aught to look good with the campy bits

How about this? The UCI could certify French beef a lot easier than the work by underage workers in the far east. Of course that might drive upt he price of a cheeseburger Royale'

New snowbike, new gravel grinder, all the test bikes for 29 inches ....no, I am not jealous not one bit...lol.

I should add that the two year thing was what he said when this all started. Who knows what he'll do now.

@dicky: Yeah, having only a one year suspension gives him "the out", but still....c'mon man! He was pretty adamant about it. To let it slide on a technicality? Lame.

That said, he'll be back, that's my feeling.

Hey GT, in your post yesterday you stated that the Black Mountain Cycles frame has slightly less tire clearance than the Fisher Presidio. Today you appear to be saying the opposite. So which is it? (It does sound like they are both quite generous.)

@Exhausted_Auk: Note: I said, "bigger tire clearances", not that the BMC had "more than a Presidio". The Fisher Collection Presidio can take up to a 2" tire. The BMC will maybe fit a 1.8". At any rate, I will likely not use a tire quite that big anyway. My thinking is to stick to a 40-42mm tire, well within the limits of either of these frames.

Once again, I'm pretty durn humbled by the attention. Many thanks and I'm quite honored to have you on one of my frames.

@blackmountaincycles: You deserve the attention, and the feeling of pride is mutual in regards to the bike. Thanks Mike!

Mike you definitely deserve it. These will are great bikes. I'm sure they will ride as well as they look. I love the classic designs tempered with modern comfort and performance.

Mark I eagerly await your build. I'm sure it will be unique!

I love my Richey speed max 40c on my monster cross. Also the Gary bar is nice. But what are you going to do with all those gears?

You won't be disappointed with a BMC cross frame. I got the first road frame Mike had. Love the bike! Mike has a nice product and is a pleasure to do business with.
-JB

@Courtney: Eventually those gears will go away!

@Ben: Thanks! I am excited to get it rolling and do a bunch of gravel road training this spring.

@james: Good to hear that! The road frame is super nice looking as well. Too bad I don't haunt the tarmac anymore, or I would be sorely tempted to jump at that choice.