It's That Time Of Year Again: Part II

I like paper calendars that you can hang on the wall. I don't use them so much for keeping appointments, or for putting notes down on them, or for anything much beyond using them for a visual reference of time.

Well, there is that and imagery. I like calendars as a kind of monthly change of imagery. You know, its almost like a new picture on the wall every month. I like that aspect about calendars with big, colorful imagery.

Now it is getting around to that time of year again where a new set of 12 images needs to go up on the wall, and of course, the better the images, the....well, better! To that end, I have come across a calendar by none other than the mountain bike dude extraordinaire, Mike Curiak.

If you don't know Mike, well you should click that link and get to know him a bit. If you like the outdoors and cycling, I have a feeling you might enjoy what you find there. If you do know about him, he needs no introductions from me. Just know that this calendar has some really great imagery, and all taken by Mike hisself. Click here for details on how to get yourself a calendar. I paid and got mine in the mail yesterday! (Thanks Mike!) 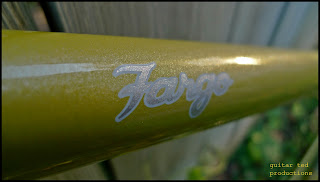 Fargo Gen II Update: I have been poking around on this build since I got this in, and last night I got it mostly done. Here is a rundown on what parts I decided to throw at this build.

Drive train: This was a bit of a decision. I could go to 10 speed, since that is what almost all mountain bikes are going to be sooner than later. I could go with SRAM, or I could go with......SRAM. Yeah, you see, Shimano STI and mountain bike derailleurs do not play well together in the 10 speed world. Okay, so if I went with Shimano, I go 9spd. Then there was the costs. STI or SRAM brifters are expensive! I could do bar end shifters and Tektro 520 brake levers for under half as much money. That's substantial. Then I looked at a SRAM or Shimano set up. SRAM would mean that I would have to get deraillers. I had Shimano derailleurs front and rear sitting around.


Tuxedo, ebony and ivory, yin and yang. there is just something about a good black and white scheme, that if done right, just looks really classy.

Take for instance these Ergon HE2 mitts. We got to review these and the post on that can be found here. This will not be about how those gloves worked, but I am going to say that these hand covers are possibly the coolest looking, classiest All Mountain, Trail type gloves I have ever seen.

The overall look is just too nice. I kind of felt guilty if they got a little dirty, you know. Kind of like when you are wearing that nice pair of pants and playing a game of catch that turns into a re-creation of "Super Bowl Whatever" and the next thing you know, you've got grass stains on your knees and your gal is coming out to the car to go to the movie.

Well, you know what I mean!

The good news is that the Ergon gloves are washable. That restored my faith in wearing them for mountain biking. Not that I actually washed them, mind you. Just knowing I could was enough. I didn't wash them for fear that they would return to the shrink wrap fit that I didn't really care for at first when I got them. I was told they would stretch out, and they did- to a perfect feeling fit. I wasn't about to ruin that by washing them! Fortunately for me, Ergon HE2's and "The Funk" never got hooked up during my review. (By the way, I hear they do just fine after washing, so all my worrying was for naught!)

Well, at any rate, the things looked "mahvelous dah-ling!" Much better than a mountain bike glove has a right to.

Okay, there's another week gone by and 2011 is fast coming to a close. Get out and make some tracks on yer bicycles and take some pics! have a great weekend!

@David O'Sullivan: Actually, Shimano changed the way derailleurs track the cassette (different geometry) for 10s, so using a 9spd derailleur on a 10s cassette, while possible, is not optimal.

It is also why I would never suggest doing this to a customer at the shop where I work. Most folks using 10s don't want sub-optimal performance.

Added to this was my price considerations, which automatically put that choice out of reach at this time for me.

With regards to shimano 10 speed; see almanzo.com and gravel winning bikes. 10 speed sti, xtr 970 derailleur, dynasys 11-32 cassette. Performance must not be that bad.

I have a Gen2 Fargo that only has about 250 miles and I love it! It doesn't have any more miles cause we're in cx season in the DC area and that keeps me busy. If I had to give up all but 1 of my 5 bikes (for some stupid reason) I'd keep the Fargo. I'd love to share a pic of it with you as your blog has been the inspiration and motivation behind this bike.( I don't know how to share it here in the comment area)I don't keep up with my blog anymore (too busy) but there is an email address.
Thanks

Re: the 9/10 speed,
If the Geometry is slightly different the shifts wouldn't be as fast but it would still work right? As in It would still index perfectly, just the jockey wheel doesn't follow as tightly? Interesting!
I would still see that as less-less optimal than barcons, but thats fine! its always interesting to see other builds and the rational / thought process behind them.

For what its worth even my road bike still runs Dura Ace 9 spd. Second hand group set at much cheaper than a current tiagra is very hard to pass up. And the performance is sublime :-)

Dont wear out your 7700. I've noticed its no longer cheap. My right shifted died and 7800 was very similar cost wide. I went 10 on everything but mtb where I'm holding put for gripshift that's not a one-off.