This one has an unusual background. When 29"ers were first discovered by me during my early internet searching, I began to dream about  designing something for the big wheels. There were not too many choices back in 2001-2002, and I had lots of sketches and doodles of ideas for 29 inch wheeled bikes. Maybe I could get one of these designs made someday? But then along came the Karate Monkey, so I put all of that on hold.

Then along about 2006 I came to know a young fella by the name of Ben Witt. During that time I found out about a local-to-Ben custom bike builder by the name of Mike Pofahl. Ben found out about my sketches and asked if he could play around with the idea I showed him. By early 2007 there was an agreement to get the ball rolling on the bike.

Ben massaged some geometry tweaks and details into the idea, and then Mike Pofahl did some more tweakage, and of course, brazed the frame up for me. Here you can see what it looked like bare naked! The intent of my idea was to pay homage to the four decades of mountain bike heritage of the modern era. The Pofahl features "twin laterals", which is my nod to Joe Breeze and the first purpose built run of 10 mountain bikes from 1977. The fillet brazing technique used to join the tubes here was used early on by several notable builders of early mountain bikes including Joe Breeze, Tom Ritchey, and Ross Shafer of Salsa Cycles fame. A further nod to the 80's is seen in my use of a drop bar. My nod to the 90's is in the anodized parts, the 90's era Race Face Turbine LP cranks, and Syncros 27.0mm seat post from my 90's Klein. Of course, the 2000's are represented in the 29 inch wheels themselves, along with the WTB Vulpines, which come from the mind of Mark Slate. He originally worked on the first 29 inch tire and helped bring it to market, which of course, is the Nanoraptor. 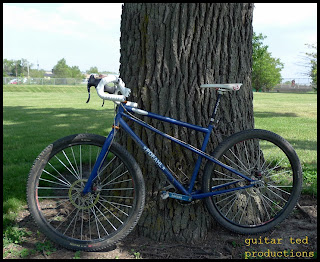 The single speed bit? Well, that is also a nod to the 70's when clunkers and BMX were off road brothers and most all were single speed.

Anyway, how does this oddball ride? It is kind of based on a Karate Monkey, but with longer chain stays. So, it is fairly quick handling up front, a trait Ben and I both were in tune on back in '07, and with the longer back end, it can be a real smooth ride, or it can hustle around a corner if you load the front end up with weight on the bars. Actually- come to think of it- it handles much like a Generation I Fargo! Which isn't a bad thing, by the way.

Like I say- it is smooth riding, but there is absolutely zero torsional flex in this chassis. None. Those twin laterals take care of that! It is also not suspension corrected, which also aids in that lack of flexiness. She's a tad porky due to the extra tubing, but running it single speed helps keep overall weight in check. I would say this bike is best suited to long days when overall speed isn't a top priority. It can zing ya with its rigidness if you start to get "racy" with it off road.

I used this set up a bit differently for a Gravel Worlds race in Lincoln.  I got in over a 100 miles on it that day and it does nicely as a single speed gravel grinder rig. I still like to use it that way but then I do add a smaller rear cog, which helps pep up the speeds, obviously, but also the feel of the bike on gravel becomes less laid back. Usually I run a 38 X 18 on gravel with this, and on dirt, a 38 X 22.

Changes? Well, I'd probably do a bit slacker head tube next time with more braze ons for racks, bottles, and Everything Cages. I could totally see this as my single speed off road touring/bikepacking rig.