How To Choose Your First Fat Bike: Introduction

The question came up yesterday- "What do you consider a good first fat bike? What would you look for?". That's a great question, and apparently it isn't easy to find an answer. So, I figured what the heck. I'll answer that! So, this will be a series considering why you, as a cyclist, may want to consider a fat bike and then what to look for in a first fat bike. I'll also cover a few alternatives to fat bikes that may or may not actually work better for you than a fat bike would.

Why get a fat bike? While this wasn't a question asked, I think it bears looking at why you would bother with this idea in the first place. This is probably the number one question that is asked at the shop where I work by folks seeing them on the sales floor.

Obviously, fat tires are a staple component of most forms of off road travel. Motorcycles, 4X4 vehicles, tractors, construction equipment, and more all use big, high volume, low air pressure tires for the optimum grip and flotation. Fat tire bikes were developed as a way to cross desert sand and Arctic snow more easily. Then the custom, one off built bikes and components gave way to commercially available fat bikes in 2005 with the introduction of the parts and components necessary to build your own Surly Pugsley. Then about six years later the lid was taken off Pandora's Box when QBP made turnkey fat bikes available right from the local bike shops. Now all you had to do was plunk down your plastic and walk out with a fat bike.

This all spiraled out of control in the last five years to the point where fat bikes are a ubiquitous product offering with several sub-niches available in most bike shops in North America. However; besides the "nerds" of the cycling world, most common cyclists still don't understand the benefits and fun that can be had by owning one of these corpulent tired bicycles.

Okay, okay! Enough with the history! Why get one?!! Well, some of this is hard to portray in words because fat bikes are a different kind of fun. First, let's put down the myth that these bikes are "hard to pedal". I get that they look really heavy, but consider the following, please: Most current fat bikes, probably 90% of them, weigh less than a 1970's era 10 speed bicycle. Almost all fat bikes weigh less than the average "paper boy" cruisers many remember as kids. And, ironically enough, many children bikes weigh more than many fat bikes do. Fat bikes are not hard to pedal folks. It just isn't so.

Secondly, can we just stop saying these are for Winter only? Fat bikes make excellent mountain bikes for lots of folks who are first timers off road, or are coming from a mostly road cycling background and find typical mtb's rather scary. Fat bikes are inherently more stable, have better traction, better comfort, and are usually safer because of these traits. I've seen first off road rides by potential fat bike customers turn into love affairs with fat bikes. It happens all the time. Fat bikes are just really good at making off road cycling more fun and less "gnarly". Look.....not everyone wants to take risks, huck, or catch rad air. Get over it. Most folks just want to have a little fun out in the woods. A fat bike is perfect for that.

But speaking of Winter.... Those same stable, well mannered characteristics of fat bikes do play well in Winter's snowy, icy playground. If you are averse to spin cycle classes, trainer rides to no where, or just miss not cycling when the white stuff shows up, you really should consider a fat bike. The "need for speed" doesn't have to be the reason to get out and cycle. The "need for getting out and exercising" is obvious for all, especially around the Holidays. A fat bike can render the snowy, icy grip of Winter a moot point. Plus, you are working a bit harder on snowy trails, which burns calories, fat, and keeps the heart pumping better than if you were to sit by a fire and have another eggnog. Look for local cyclists who have treaded out a "groomed surface" to ride on, and get out and explore. Or, just go see Christmas lights in your neighborhood, or savor a sip from a flask on New Year's Eve while fat biking. Just have fun, get out, and use the tool that is best for the job in Winter- a fat bike! 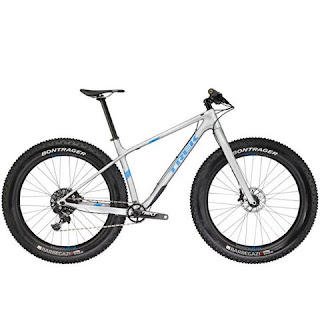 So, there are great reasons to own a fat bike. Fitness, being outside all year, going places you cannot go on a "normal" bike, and.......well, just having more fun! I mean, who doesn't like fun? Fat bikes are so much fun, more than most any other bike, I cannot imagine anyone not smiling when they ride one.

The rest of the series will be about fat bikes, the different types, where those types work or don't work best, and why something else entirely might actually be better.

Then I'll get into some deeper aspects of fat bikes. Things like tire pressures, suspension, no suspension, wheel swaps, geometry, and more. I am basing the articles on some questions I have received from a reader and my experiences with fat bikes of my own, with getting my son set up on them, and with various customers of the shop where I work. Plus my own insights from being a bike nerd. You know..... I read and think entirely too much about this stuff. I may as well share!

Now, I've got enough material to last a week or so, I think, so I will intersperse the fat bike posts with other things going forward. If you have any specific questions you want me to cover, let me know in the comments section.

I rode my Blackborow on RAGBRAI this year and had a ball! It is such a fun, versatile bike! With the right tires you can ride a fatbike anywhere!

@ Robert. What tires did you run?

Awesome topic. Looking forward to the whole series. I bought a Pugsley Single Speed last Fall the day before the first snow and I had so much fun riding it in snow and on single track.

Looking forward to this series! Loved my Mukluk, and love my Farley.

Looking forward to this series as well. I am extremely fatbike curious, but previously thinking they are only good for snow/sand, so I'm looking to get more insight for "regular" riding on fat bikes

@Ari: I rode Vee Rubber V8's. I have the blocks pretty worn down but even when new they rolled pretty fast on the road. I pumped them up around 15 psi and was still very comfortable and did not worry about cracks, curbs, or rumbles!

I'd be curious to find out your thoughts on studded tires. Do you have any experience with studded Dillinger 5s or Vee Snowshoe XLs?

@Nathanael: Tires will get discussed in a later post. For the record, I am not a big fan of cheap studded tires. You've got to spend the big bucks to get studded tires that actually are fun to ride.