Wool For Summer: My good friend Dr. Giggles turned me on to how to stay cool in Summer. He said, "Get-cher self a wool jersey, son!" I figured he was mad, or had rolled down too many upstate New York and Vermont hills, or something. But he laid out a very convincing case, and being a member of the Slender Fungus Cycling Association, well.....I took note.

I got a close out special on a Giro wool jersey, which I employed much of last Summer to great success. Ol' Dr. Giggles wasn't foolin' around. He knew what he was on to. So, I was on the lookout for more "Summer weight" wool jerseys, and I'll tell ya, there are not many. I just wasn't connecting with many of the ones Dr. Giggles was suggesting, and some of the others some were pushing my way didn't really hit me right either. I don't know...... I am a picky son of a gun when it comes to what I wear. Just ask Mrs. Guitar Ted!

So, anyway, I was checking out the Twin Six website one day and hey! I saw this thing called The Standard Wool. I didn't waste any time and ordered one up. Those T-6 guys just make really classy, well fitting stuff, and this was no different. However; they also don't do "mee too" design, so there are a couple of things here that are different. The colored part, (blue in my example here), is actually regular ol' jersey fabric. Which is a different touch, but they took that same idea and used it to not only give color to the three back pockets, but to give those pockets structure. Ever had something heavy-ish in a regular wool jersey pocket before? Well, if you have, you know that whatever it is ends up down around yer butt after a while bouncing around back there. Wool stretches, but the Standard Wool Jersey's pockets do not.

But there's more! In the image above, you cannot tell, but I am soaking wet from a rain shower I got caught in. Hey, wool keeps you warm when that happens. Pretty awesome. Expensive? Yes. $145.00 expensive, which may scare a lot of folks off, but for how this fabric works in hot weather, it is money well spent for me. Your mileage may vary.

Most of the ride images and stuff I post on here and RidingGravel.com is all imagery taken with my trusty Olympus Tough TG-3. Well, it hasn't let me down yet, but I may replace it, or more likely, add something else to the camera pool. I saw that Olympus just released a Tough TG-5.

Now, I am not one to just get something because it is the next gen thing. You might have noticed I didn't mention the Tough TG-4. It was a minor change from what I had, and I did not see the value in "upgrading", if that even was an upgrade. However; there are some cool features that this TG-5 has that have given me something to chew on.

Basically, the TG-5 is somewhat similar to what I have. However; it does support RAW files, (which I haven't ever used, but probably should), and from my standpoint, better control layout and ergonomics. The TG-3 is a slippery little devil, and there isn't a lot of purchase on the camera body, which gets a little dicey while riding. (Yes.....I shoot a ton of my images while moving. So, sue me. ) The TG-5 has improved grip areas and the control dials are redesigned as well. This may be something that allows me to zoom in with one hand. That would be nice. They also redesigned the mode dial surround so that it doesn't get knocked out of the setting you select easily, which the TG-3 is really prone to do.

The accessory items available for this camera also look a bit more interesting and refined than they have offered in the past. That is a bit enticing, especially the zoom lens, so I may have to seriously consider that as well. But the main things they kept the same were good things. The "tough" features are all the same. Dust proof, freeze proof, shock resistant, and waterproof. All things I insist on for my carry-along camera on my rides. I don't want to baby sit an expensive camera while I am out riding.

It's $450.00 though, so I won't be just grabbing one right off. I need to assess my needs here, and I do have a functioning TG-3, so it isn't like I have to get a camera. But for some of the features this new one has, and the nicer video spec, I can see where it might prove to be a good upgrade, if I use it for video and RAW files, etc. 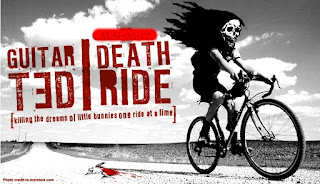 Thanks for the feedback, and due to receiving that, I have come to some decisions on the ride.

First- We will start and end at Broad Street Brewing Company in Reinbeck, Iowa. The ride will start at 6:00am.

Second: We will be flying by the seat of our pants if it rains or is wetter than a Level B might allow us to do. We may truncate the route, or .......who knows? If it gets weird, be prepared to roll with it!

Third: This means that the route will have three possibilities for resupply, bailout, or not. First, at mile 28-ish, we will pass just West of Dysart, Iowa. I figure this will be an optional stop. Then we will be going through Traer Iowa at about mile 50. This will definitely be a stop. Then at about Mile 76 we will pass through Garwin, Iowa, and we will definitely be stopping there, I figure.

The route will be 103.5 miles. I plan on doing a recon, at least partial if not all, this holiday weekend. Stay tuned for a recon report next week sometime.

That's a wrap for this edition of Friday News And Views. Have a great weekend!
Posted by Guitar Ted at 1:30 AM

i tried some twin 6 wool jerseys a couple years ago (the light weight kind), and was very impressed with the performance. it's been 3 years, and moderate use - and the wool holds up well (all wool wears thin in spots)... and bonus; in another order when i completely disregarded the written return policy (for returning skinny xl jerseys for roomy xxl's) they merely lectured me on my carelessness, but still processed my request post haste... very satisfied customer with their product and service.

Happy Friday Guitar Ted, The wool jersey sounds awesome. The price tag is a little off putting but I tend to buy stuff and then keep it for a long time, so I'm sure it would pay off in the long run. Someday I'll learn

IMO, if you aren't a huge photo editing guy or one who likes to dabble with HDR; RAW is something you'll likely never need or use. I prefer RAW but have been known to spend some time tweaking photos to get the most out of them post ride. You might also look outside the "tough" category, I've carried a G15 for almost 3 years now (Sept. will be three years) and it's served me well in rain, gravel, single track, snow or anywhere else I've wanted to take it and I've even dropped it a time or two but not much since it's got a nice grip surface. Just my opinion mind you but sometimes I think you pay more for a "tough" label and you could get by quite well with a non tough camera and a water proof bag in case it really starts to rain heavy.