Since the DK200 it has been waaaay hot and very dry in the Mid-West. Uncommon for here and especially at this time of the year. It made for some very DK-like conditions when we factored in the wind up here where I live.

So, there have been days where the wind had been gusting to 35-40mph and the air temperatures were in the upper 90°'s. I don't mind a little wind, but combined with that hot, dry air, it was too much. I sat out several days of riding in the country due to that.

Then I have been battling a fatigue issue as well. I am not sure if I allowed myself proper recovery time after the DK trip. I was falling asleep almost uncontrollably several times in the afternoons last week. I've taken a few days to just rest, and with the recent heat, I think I made a good choice there. Now just Wednesday we got a break and received over an inch of much needed rain. Hopefully we will be coming out of this super hot and dry pattern for a bit!

All said, I did manage to get out on a couple rides in the country lately. Not much to see though what with all the dry air and heat knocking the vegetation and crops for a loop. I did see some dust devils and there was copious amounts of gravel dust, of course. The rain should have that knocked down for a day, at least!

Yesterday the news broke about a tire from WTB for gravel dubbed the Resolute. Readers of the blog here may recall that I had a picture of this tire up that I took at the DK200 expo the Friday before the event. So, here now is a bit of back story that I can share now that this tire is "official". This will show you how the bicycle industry works (or not) behind the curtains, so to speak. So, please allow me to explain, as briefly as I can, why the Resolute was seen before its planned release.

Of course, first and foremost these companies need to make money to stay viable and employ people. So, the bigger money is in selling brands your tire (or whatever) to spec on new bicycle models being produced. This is called "OE spec" in the industry. (Original Equipment spec) Of course, WTB tries to get as much of that as they can. For this new tire, I have heard that WTB was pretty successful in gaining some spec with the new Resolute. Again, we all know that components have to be sold far ahead of the release of new models so that when the time comes you can actually purchase said bicycles with (hopefully) the proper spec components. Well, there was a 2018 bike in the DK expo with 2018 spec. Yep..... We were not supposed to have seen that bike yet. It had 650B Resolutes mounted up.

Well, the good folks at WTB about choked on their lunch that Friday when they saw their "as yet to be announced" tire on my blog. I was asked politely not to talk anymore about said tire, which was easy for me to do, because I didn't know anything more about it than what I saw. For instance, I did not know there was a 700c X 42mm version coming, or that the 700c version was skinwall, (yay!), or anything about the design, other than a guess. Well, anyway, it turns out that some over eager product manager sent out a 2018 sample to show at the DK200 expo and that person didn't think about product release dates and marketing plans for companies represented by their bike's spec.

Well, that's all water under the dam now, but I wanted to show how this kind of thing happens. It isn't the first time it has happened either. I recall an incident with Niner Bikes and WTB at Interbike one year......... but that's another story. 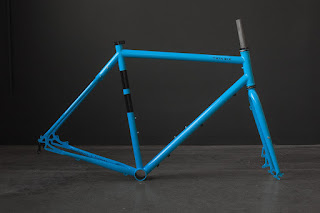 Twin Six Introduces New Color For The Standard Rando: So, y'all know I really like my Twin Six Standard Rando bike. It rides really well, and it is stable in loose gravel, unlike many other bikes, due to its low 75mm bottom bracket drop. Sure, it has its drawbacks. For one, in 700c, it cannot handle the bigger tires due to clearance issues. It doesn't have a third water bottle cage mount, (I understand newer ones do?), and unlike the Ti Standard Rando, they didn't put two cage mounts on the inside of the triangle on the down tube. But other than those quibbles, I really like that bike.

Well, now they offer it in blue. I really like this color. I would really like to have a Standard Rando in blue. But.......I already have a green one. (See the image above) The one I have is certainly enough, but wouldn't it be cool if somehow you could pass your bike through some ray emitter or a filter and it would change its color? That would be pretty awesome.

Have a great weekend, and ride those bikes,if you can!

After that expose, got to get my hands on some of those tires!

Will those tires fit on that blue frame?

@Ari- The 700c ones definitely WILL NOT fit. They are 44mm tires on my WTB KOMi25 rims @ 40psi. The 650B ones might work, but at 5mm less wide than the Byways, the overall diameter is sure to be lower, and my T-6 with Byways is almost too low as it is.

They need to make a lot of these gravel bikes wider. Maybe Mike can give them some pointers! Thanks for the response. Ari