Wednesday. Time to ride. Well.........it would be, if it ever would quit raining on Wednesdays. Last Wednesday I got snookered out of a ride and this one looked to be headed in the same direction. We had a nice thunderstorm roll through in the morning, so I took the time to maintenance the Twin Six Standard Rando and change the elastomers in the Redshift ShockStop stem I am testing on it.

Around lunch time it cleared out and I decided to eat and then I would get out there. Well, about the time I am headed out the door, radar indicated rain all around Waterloo. I went out anyway. Heck, sometimes radar indicates rain and it amounts to nothing. Fake news and all. I wasn't going to miss out on riding.

Things looked wet all around, for sure, but where I was it seemed dry enough. No standing puddles, no spritzing of rain, no immediate threat to me. So, I went onward. Aker Road to Washburn, and around down on Holmes Road to Petrie Road to test the new Resolute's mud clearing capacity. I figured the rain would have made some nice mud for me to get in to.

That would be found out in due time. Right at that moment I had a nasty Southeastern headwind to push against. It was tough sledding heading South. The gravel was wet and actually muddy in some spots here. They must have gotten quite the gully washer that morning. No trouble with fresh gravel, at least there was that. I found plenty of good lines on my way.

Petrie didn't look too bad. I actually made it to the place where the black dirt turned to clay, then all bets were off. The wheels stopped turning and I was obliged to walk after that. You can see the top of the hill in the image here, and that is where I finally could drop the bike and roll it along where there was a line of clover blooming on the left side of the roadway.

The Resolutes clear mud like a champ, so once I got rolling again I didn't have to stop to scrape mud at all. In fact, after about a half mile of gravel you'd never know that I had been packed up with mud unless you looked at the frame. The tires looked fine.

Heading East was better than going South, but when I turned out on Ansborough, I got the full effects of the tailwind and I was off to the races. The gravel was newer over here, but as long as I was headed North it did not matter. I found it easy to keep hammering. 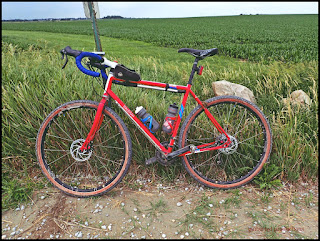 I went down Washburn Road and back to Aker, then started making my way back toward Waterloo. I was keeping an eye on the sky the entire ride, but it wasn't until I made it back on to the Sergeant Road bike path that I began to think I might end up getting caught in some rain.

It was going to be a close call, but in the end, I decided not to try to outrun this. I know when to make a run for it and this rain cloud wasn't warranting a heavy output. So, I motored onward.

Getting wet on the bike is maybe something a lot of people try to avoid. I guess I'd try to avoid getting into a heavy thunderstorm, but your garden variety shower? Meh..... Not that big of a deal, especially in the Summer. I wasn't too worried, and as it turned out it didn't really start raining on me in earnest until I was about 12 blocks from the house.

It is kind of a weird thing with me and rain. Once it starts raining, and I am riding, I get a boost of energy. Once on a Guitar Ted Death Ride Invitaional it rained on us and I took off up the steep hills of Jasper County like I had a turbo boost. A friend started calling me "Contador" because I was climbing so well. It was just that it was raining. I cannot explain why I am that way.

Well, the rain made me go like a son of a gun and I was home before ya knew it, dripping wet on the front porch. Some "solstice ride"! Usually it is a long day in the saddle where you expect to have to use copious amounts of sun tan lotion. Not dodging rain storms and lightning bolts!
Posted by Guitar Ted at 1:30 AM