DK My Way: Gear And Comments

The gear and clothing I used for the century ride in Kansas was spot on, for the most part. I wanted to detail what I used and what was good or not so good here, in case anyone wanted a reference and ideas on what to do for a ride in the Flint Hills.

First of all, it has been my experience down there that water, specifically having enough of it, is a big challenge to riding the Flint Hills. There are some pretty remote places down there with no chances for resupply of water. Added to this is the fact that, generally speaking, the area is windy and somewhat arid. This has the effect of sucking your moisture out of you without you realizing it. Staying hydrated, in my opinion, is mission number one when setting up for a self supported ride in the Flint Hills.

The Gen I Fargo is a bicycle that has a lot of braze ons for water bottle cages. This along with the Wolf Tooth B Rad System afforded me the opportunity to carry six water bottles of water. I could have gone with seven, but the lowest, down tube mounted bottle I reserved for my tool kit. I'll talk about the B Rad System in more detail in a separate review, but (spoiler alert), it works. I was glad I got that before the trip.

The capabilities of the B Rad equipped Gen I Fargo allowed me to get by without a hydration back pack. I carried nothing at all on my back except a few odd things in jersey pockets. This allowed me to not have to suffer the beat down of 3 liters of water on my back over Kansan gravel roads. I had plenty of water, but given the conditions this time, I wasn't really tested in this.

The Bike Bag Dude's Chaff Bags have been a staple of my set ups over the past 5 years or so now. I would not ever do a long, extended tour or day ride without at least one of these on my bicycle.

This time I used the single Chaff Bag I took for tube and tool storage, along with the convenience of having a quick place to shove used almond butter packets and other trash. I attached this bag to my Bar Yak System.

The Bar Yak System I use is a combination of the load bars, aero carbon bar ends with a titanium cross bar, and the Pergrine Arm Rests. I also attached the Q; Pro cue sheet holder to the load bars. The cue sheet holder is awesome and probably something I should have had a long time ago. The Bar Yak arm rests and aero bar end set up allows me to relieve hand pressure and prevent numbness. Obviously it is more aero as well. The load bars are a great place to strap an under the bar roll or, as in my case, the Chaff Bag. I even mount my light off the Ti cross bar, so there is that bit of versatility to take advantage of here as well.

I did not use a frame bag or traditional "under the top tube" half bag/tank bag/triangle sort of deal this time. First, it really doesn't work to have that and all the water bottles on the bike. Secondly, I was trying to minimize my kit. I did use my Bike Bag Dude Garage top tube "fuel tank style" bag. I also used a just acquired Carousel Designs top tube bag that is most like a "Jerry Can" from Revelate, but kind of different. In the Garage Bag I stowed food, a few small tools, lip balm, and other items I wanted quick access to. In the Carousel Designs bag I stowed my Lezyne mini pump and all my maps I needed.

I did not use a saddle/seat tube mounted bag, although I brought one by Banjo Brothers in the event I thought I might need to carry rain gear. The improved forecast ixnayed that choice from the final set up.

I also swapped out my BodyFloat seat post for my Salsa Cycles Ti Regulator post. I did that mostly so I had the option to run a saddle/seat post mounted bag, but in the end I think it worked out well in terms of comfort. It isn't as compliant as the BodyFloat, but it feels better when climbing because it isn't as compliant as the BodyFloat post. I missed the BodyFloat on the copious amounts of washboard road, but other than that, no. The saddle was changed to a WTB Pure, by the way. A Brooks Cambium will get put on at some point.

Clothing was my new RidingGravel.com kit with a Bontrager base layer tank underneath. Thin wool socks, 8"ers, and my Shimano three strap mtb shoes were on my feet. On my head I had a Twin Six cycling hat and my Bontrager helmet. Eyewear was from Oakley.

Nutrition was basically Epic pemmican bars and Justin's Almond Butter packets.I did have some salty chips and the Budweiser. I used Gu energy electrolyte tabs since I forgot my Elete at home. I drank 11 bottles of water throughout the ride. 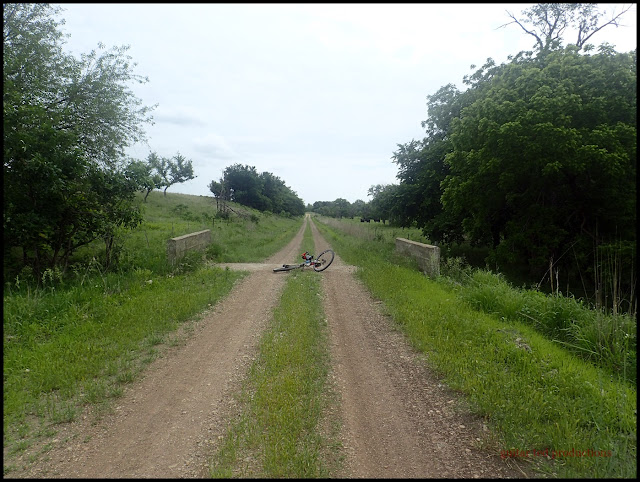 Comments: Mentally I used a couple "mantras" on this ride. One was "Shift early-shift often." I said this at the beginning of almost every hill. I have a tendency to mash, so I used this little phrase as a way to remind myself to shift and spin. The other was "Enjoy the ride". Sounds simple, but this helped when I found myself suffering, or going too hard. If I was hurting, I tried to focus on things around me that brought me joy or put a smile on my face. If I was going too hard, it was a way that I could limit my output and be more attentive to burning up too many matches.

I also allowed myself to take as many images as I wanted to. This was about enjoyment, not racing. I wanted to take in as much as I could on this ride. That said, when I got back, had showered, and had walked down to the start line, there werestill riders coming in for their DK100 Half Pint finish. So, maybe I should start "racing" the way I rode the DK My Way!