The Problem: Old MTB I hardly ride anymore, put up for sale, no interest seen. Solution: Re-purpose most of the parts into a new bike. Side Effect: New bike takes place of another in the stable and I have a prospective owner for that bike already. Result: One new bike I'll use and two bikes eliminated from taking up valuable space in The Lab.

Are you with me so far? Now for the details.

The old Singular Buzzard is sitting in the Lab unloved and unridden. It's been this way for several years. Last year I put it on my Garage Sale Page, with zero interest. So, I had a 'light bulb' moment Wednesday. How about a 29+ bike? See, the idea came up when I was speaking with the Teravail guy about possibly reviewing some of their tires. He suggested the Coronado. and when I checked on sizes, well, the only tire in that range I could have possibly tried was a fat bike version of the Coronado, but I noticed that they had "plus bike" versions as well. Trouble is, I don't have a good plus bike to try a Coronado on. (Note- More about Teravail Tires coming later in the post)

Then Wednesday I saw a review of the Coronado with those tires mounted to a Krampus. I liked what I saw, but a Krampus? Nah! I pretty much have that bike now and never use it. But what about a Surly ECR? Those are plus bike tire compatible! Off to the Surly Bikes site to investigate. I look at the current ECR offerings, and I see the "Blacktacular" frame set. I could go with one of those, and my current Velocity Dually rimmed wheel set with the big Coronado tires. Hmm...... Maybe single speed too. Hmm...... Then I see the ECR takes an 1 1/8th head set. I have one of those. Hmm....... The head set in the Buzzard could be the same one I need for the T-6 Standard Rando build..... This is getting interesting.

So, what bike does an ECR replace? Well, it would essentially be a better, more versatile replacement for my ill-fitting and limited 1X1. AND- I have a person to pass that bike on to that has already indicated interest. I then only have to sell a Buzzard frame and the fork with it, and hopefully that would be enticing enough to someone to get it out of my Lab. See? New bike, minus two bikes = a happier Guitar Ted.

New Shoes In For Testing:

The Hutchinson Touareg tires showed up earlier this week and I have mounted one set so far and tried them out. Here's a very, very initial impression on the 700c X 45 tires.

Initially I didn't think these were going to be 45mm wide, but right after mounting them, they were very nearly 45mm wide on Shimano GRX wheels, (not the widest internal measurement wheels by any stretch), and so I am comfortable in saying they are probably going to stretch out to be what they say. That's important to note, because many bikes will not be a good fit for these tires since they are that wide in reality. Note- There is a 40mm version of this tire as well.

The profile is very rounded- a definite "C" shape. The tread reminds me of a cross between a Donnelly MSO and a Michelin Power Gravel tread pattern. Lots of tightly packed, arrow-ish shaped, low center blocks (MSO) and then stepped rows of higher, tiny , tightly packed side tread (Power Gravel). Yes- they fling small stones a bit.

Feels fast on my super deteriorated gravel, smooth dirt, asphalt test track. Gotta get out on gravel on these soon, but I don't know for sure with this being a holiday weekend when that might be. AND it is supposed to be rainy most of the weekend. Ya know......Memorial Day Weekend? (I think that means "Rainy Weekend" in some foreign language) 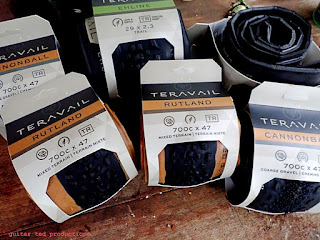 Yep! I'm going to be pretty busy in the coming weeks. Teravail, who saw my recent Rutland review on Riding Gravel, contacted me and asked me why I had issues with their original models. Thus started a conversation and that resulted in their informing me that they changed their tires since I had last tried them, (previous to the Rutland review).

We decided that I should give the fully armored versions of the Cannonball a whirl again. And I am also taking a look at the Rutland in the "Light and Supple" casing for contrast. Then I am going to get on their Ehline tire and put those to test on the Fargo as a gravel/bike packing option.

The 700 X 47mm size is intriguing. Of course, there are a few 700 X 45mm options out there. The WTB Riddler and the above mentioned Hutchinson Touaregs are examples that come to mind. But a 700 X 47mm tire is odd. I haven't heard of that size until I ran across this with Teravail. I find it interesting because, as of now, there are not many gravel bikes that can handle a tire that wide and voluminous. But it also tells me there will be more. Tire manufacturers don't make a tire size on spec that someone might like it. No, they make tires for perceived needs now and in the near future, or even better- for production bikes, otherwise known as "OE spec". (Original Equipment spec)

A company that scores an OE contract to make components for a bicycle has guaranteed sales. Making tires for the aftermarket means what? Maybe. You might sell a bunch, or you might not. This is why when you see an online forum ranting for, say, White side wall 650B X 55mm studded tires that weigh 700 grams each, well you probably will never see them getting made. No matter how much sense that might make to you, or 100 people online.

This is why when I see something out of the ordinary getting made, my ears prick up. There is something going on I need to pay attention to. And 700 X 47mm is one of those things.

That's it for this week. I hope all you US readers have a safe, happy, and adventurous Memorial Day Weekend.
Posted by Guitar Ted at 1:30 AM

Been loving the light 29x2.8 corandos for mixed terrain riding. I've used them on a Velo Orange Piolet and a Salsa Fargo.

Which bike do you now have and not ride that you say is like a Krampus. Aren’t the ECR and Krampus really at least somewhat similar.

Have those Coronados in 27.5+ and Fat, I really like them. You should probably still review them but, you know, they have my seal of approval...

Edit: I guess I am thinking of the original style Krampus w/ rigid fork.

Can't go wrong with an ECR. I love mine.

I have had my ECR for 3 years now, and once I swapped out the stock Alex wheels for Velocity 35’s it transformed the ride. Greatly improved, and a pound or so of rolling/rotating weight lost. Overall, I love the bike. The fit, the ride, the versatility (are there 3.25” tires coming? Hmmm....). It goes anywhere, and tracks like it is on rails.
One thing bugs me about it, however. Some people wonder what “ECR” stands for; I think it means, “bicycle with awful chain line.” Even with the stock Surly OD crankset, or probably because of it, with a 2x10 it is always cross chaining on the left half of the cassette. It’s so pronounced that if in the big ring and the left half of the cassette, I can’t roll it backwards on the ground because it jacks up the derailleur.
I understand the reasons for tire clearance and all, but the chain line was much better on my old Moonlander with a 2x10 and a 4.8” Lou on the back,
GT, if you have any suggestions to sort that out with a 2x crankset somehow, let me know. You will make many ECR people happier than they already are! I just dig a 2x (or triple, really) and am not ready to go 1x. Yet.

@tntmoriv - Yeah, I'd have to see an ECR in the stand to know anything about that chain line issue. I did ride an ECR once when they first came out at Interbike in Las Vegas. I was really impressed by it then. I cannot recall any weirdness in shifting that one, but I probably was focusing on how it handled more than the shifting, which on a demo bike is almost always compromised due to how often those bikes get abused in those settings.

It may be a while before i can implement my plan as all the ECR's in normal sizes are out of stock. Extra smalls and XL's are all Surly has as of 5/22/20

@Skidmark - I have a Singular Buzzard, which is very similar in purpose to a Krampus whereas an ECR is more 'touring' oriented, not slacked out and the ECR has more versatility. (single speed-able) which I am interested in over a Krampus.

Will be interested in your thoughts on the Ehlines. I was talking with Ben Witt about those a couple of weeks ago as a good replacement tire for the 29+ Kennebec/Cumberland combo I currently have on my Woodsmoke. That combo is nice in the right settings, but it's a touch too aggressive for most of the stuff that I ride around here.