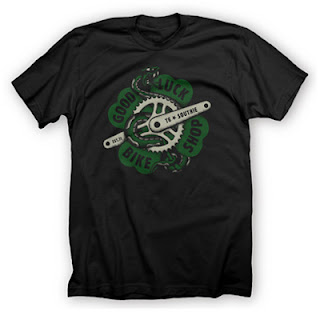 Get yer "T-shirt Of The Month" from Twin Six starting today. This deal, the "T of the M", has been going on for awhile now, but this one is the best of the lot so far. (My opinion) It's got a snake, a crank, a four leaf clover, and it's on black. What else could you ask for?

Get it while it's hot, 'cause they don't do many of the T of the M's and you know you really need this shirt! 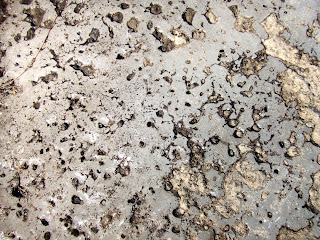 In my "guess what this is" pic from yesterday, we got close, but no cigar. Here's what you are looking at: It's an extreme close up of a section of river ice about a foot thick,and several square feet in size, this being the top of the ice. The beige colored stuff to the right is embedded dirt, the stuff that looks like gravel and oily smears is actually where water has sweat up through the dirt encrusted ice, causing little puddles of frozen dirt to accumulate. The grayish back round is the surface of the ice itself. The snow that had been on top of this huge piece of ice was scoured off once the ice floe had run aground of the shore in the flood and the water ran over the top of it.

Yeah, so you never would have guessed it, well I know! But it is cool, at any rate.

So, no CIRREM for me this weekend. I'm recovering yet and I'm not going to push the issue. However, if you are headed down to ride the metric century, good luck. The weather should make the course interesting, and I'm sure it will be a fun time.

Speaking of gravel, I may see some this Sunday afternoon. We'll see, but if I do, I'm not saying where it will be! It might have something to do with this, or not. Stay tuned!

Have a great weekend and ride that bicycle!
Posted by Guitar Ted at 1:00 AM