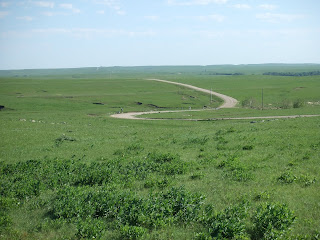 <====Looking back on a three mile climb out of a tree lined valley you can't see from here. 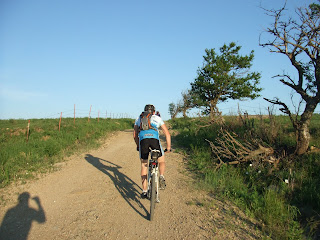 <====Check out the fence posts on the left to get an idea of what the steep little climbs were like over really rocky, rough sections, most of the time. 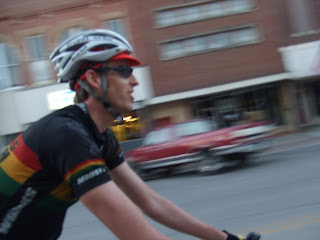 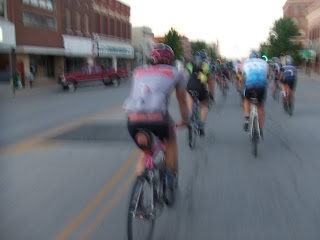 <====Speaking of Endurosnob, there goes his Chattyness. I didn't see him again till much later. 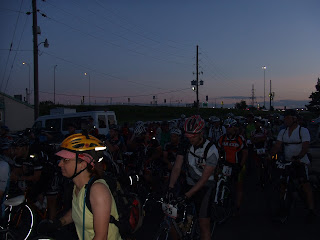 <=====The scene at the start where 85 riders set off into a blistering heat and wind filled day.

The ride in Kansas was awesome until the sickness caught up with me, and it still is with me. I went on a short 3 mile errand with my host in Bellevue, Nebraska today and the same chest tightness and heart rate issues were dogging me, just as they were in Kansas. Guess it may be awhile before I get back to 100%. Anyway, I must admit that those conditions were brutal enough, and my training not good enough that I probably wouldn't have made the grade as it was. Maybe, maybe not. I just know I did what I could do, and I couldn't do anymore than that on that particular day.


So, the bike worked well, the body didn't so much. I just hope I get another shot at it someday. Hopefully next year. I'd sure like to finish one of these things, but everything needs to be working at the same time. Given how well I felt the weekend before, and how hard I was able to work sick on that weekend, I know it could happen. It just wasn't meant to be for me this time.

From this point, I think I'll look for a race or two to do. I have the GTDRI in July. That'll likely be the next big ride for this guy.
Posted by Guitar Ted at 1:00 AM