Last Of The Holdouts: Update 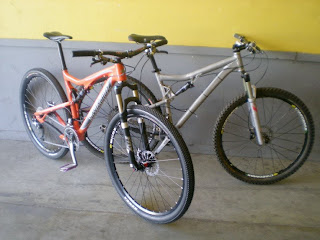 <===A Santa Cruz test mule in the back and a production prototype Tall Boy.

Well since my Friday post, a couple of the companies I mentioned have had images leaked of their work on 2010 29"er models. We have the Santa Cruz "Tall Boy" here in respendant orange to show you. It is a carbon fiber frame with just a hair over 4 inches of travel.

Funny name, "Tall Boy". I don't think anyone here in the Mid-West calls the big cans-o-beer tall boys anymore. We would have dubbed this rig the "Orange Silo", if we were thinking along those lines. But be that as it may, this bike will be available this fall, and expect to make a big payment! 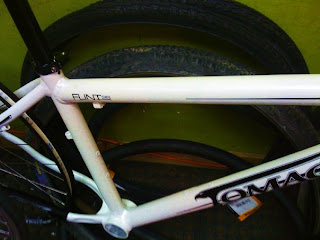 Tomac Bikes, which is located in Lincoln, Nebraska, is coming out with a 29"er for 2010 and this apparently is it. The Flint 29 will likely be something along the lines of this aluminum hardtail. The bottom bracket on this prototype appears to be an eccentric compatible one, indicating geared or single speed use. No word on whether this will be production spec or not.

So the leaks keep on coming. One thing is for certain, and that is that 2010 will be a big, big year for big wheelers!
Posted by Guitar Ted at 6:40 AM