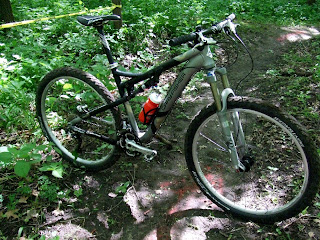 Today was planned to be a big riding day. Early in the day I was going to get out to the Camp and ride some bikes for testing purposes. Later on I was supposed to do some gravel training with d.p. One thing happend, the other didn't, and that all due to a happening in between the two.

I did get up to the Camp and buzzed around on the tacky trails. Even though we had rain the day before, the trails were in great shape. Of course, they'll never be in better shape due to the race being held up there this weekend.


The weekend.............ah! That's another story, but I'll stick to this one for now. Anyway, so I have a couple of FS rigs to ride up there and what is great about Camp Ingawanis is that there are some specific features that really test a bike in certain areas of design. A twisting, steeply downhill section, for instance, that will bring out braking issues or suspension flaws. Rooty climbs, almost step ups, that test a bikes ability to grip the ground and especially tires and wheels in that vein. Off cambers that laterally load up wheels, forks, and frames, not to mention the test of a tire's grip in those situations. Big G-outs, ruts, rocks, twisty turns, and other stuff is out there, and in many cases it is isolated so you don't have to be concentrating on a lot of stuff at once. I like the Camp for that and a lot more. 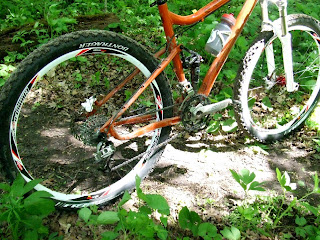 The dirt was at the ultimate tacky stage where it wants to load up into a tire's lugs and make a big, sandy doughnut out of it. This is pretty tacky dirt, so if a tire can fight through that, then it gets pretty high marks from me. I also like to corner when the dirt is like this because the tire, (if it isn't all balled up in dirt), will stick like glue and you can really rail a corner. Fun! My cohort in Cali, Grannygear, says this is "Hero Dirt". Maybe it isn't quite like that here, but I'm thinking it is pretty close!

Then I got to see some wildlife. I scared up a wild turkey, and a few deer along the way. Nice to see the critters when I'm cruising down the trail.

Now about that "thing in between". Yeah............plumbing! I hate doing plumbing work, but when the kitchen sink isn't working right, well......you hear about it if you are married.  I am married, and I love my wife, so, well........I was doing some plumbing yesterday!

That took longer than I wanted it to due to the fact that I have myriads of bicycle tools and very few household tools. Those household tools get buried, and hard to find as a result. Then I had to make a trip to the hardware store, pick up the kids in the meantime, yadda, yadda....

Well, I ran out of time to meet d.p. and gravel grind. So, we're going for "take two" tonight. Hope everything works out!
Posted by Guitar Ted at 1:00 AM

@mw: Well....I suppose somebody has to, or we wouldn't have plumbers in the world. Good on you! I am not gifted with that joy myself.

Most of my plumbing experiences include two or three trips to the hardware store and some frustration and finally a call to the plumber bagging for help.
The Camp is in great shape - ought to be a very good time racing.

Guitar Ted said...
This comment has been removed by the author.
9:15 AM