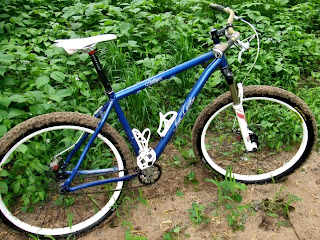 So I am looking around down in the Guitar Ted Laboratory for something the other day, and I stopped to take stock of how many single speeds I have.

Yeah, yeah.......I get to test a lot of bikes. Like the one I have pictured today, they come and they go. But I am not talking about those bikes. I'm talking about bikes I bought for myself, or ones I salvaged into single speed rigs.

I got to thinking about why that is. Why so many single speed bicycles? Well, maybe this quote from this very blog back in 2006 will help explain it.

"There are about as many reasons people ride single speed bikes as there are people. I'm not going to delve into that subject. I do it because that's what I grew up on. I never really quite got on with gears, although, for road riding, I've got the hang of it. But that's just me! "

So there ya go. I never had a geared bicycle growing up. I just pedaled harder, or walked. I suppose that is why I gravitate towards the single speed rigs. I never was in too much of a hurry, (just ask my Mom!), and doing any sort of maintenance was kind of an unknown for me back then. I mean, you had to air up the tires once a year. Then what? Well.......I did skid through my fair share of slicks!

I certainly don't do it to be cool. The single speeding cool factor has long been gone. And I was a single speeder before it was cool anyway. I don't do it to be fashionable, because well......most of my single speeds look trashy! (The Raleigh Rainier being a notable exception) I do have a fixed gear road bike, but you wouldn't ever mistake me for a "hipster". For one thing, I don't have the wardrobe, and for another, my fixie is an early 70's Raleigh Gran Prix rat-ride. Nothing at all fashionable about it. Heck, the most I spent on it was for the Miche track cog and lock ring that I run on it. Come to think of it, that is all I bought for it!

Why do I have so many single speeds? Heck.......I dunno! It just happened that way, I guess.

Sign me: Shiftless In Iowa.
Posted by Guitar Ted at 1:00 AM

I feel you on the "that's what I grew up on". Good post,Ted,brought back memories of "making" SS's back in the day :-)

i doubt if i run gears on my commuter bike anymore. years of trashing expensive parts are over.

After the last trans Iowa we are going to be riding more singlespeeds for training and leave the multigears just for long days when the gravel isn't wet. It's a lot cheaper that way!
ari

Ah yes, I remember those days when it seemed to take forever to ride my ss Appollo Racer bike from the Ben Franklin store down to the river & stash it in some sumac thickets for an afternoon of messing around building forts or wading the river, then back all the way home before supper was ready & mom got to wondering where in the world you were!

Good memories for sure & I guess I never outgrew the ss bikes myself.

So easy to build up too. Just one thing to think about on a ss....pedal!

My first single track rides were on a Schwin with a bananna seat and ape hanger bars. I feel you.

I remember riding it in the middle of midwestern winter at night on my birthday when I got it.

Probably why I still love heavy singlespeeds with cruddy brakes.

Once I asked Gary Fisher what he thought of the rise in popularity of SS's. He said when he realized it was happening he spoke to the big players (Shimano etc,) & told them they need to make better, more reliable, & innovative products. His take I thought was interesting...