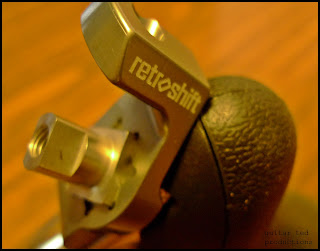 A week ago I talked about Retroshift, a component that is a different take on shifting your drop bar bike. Instead of using STI/brifter type shifters in demanding situations like cyclo-cross, or gravel grinding, where grit, dirt, and grime are common and for which these types of integrated brake/shifters weren't designed for, these Retroshifters are suggested. They use the simple, durable, and easy to find down tube/bar end shift levers which you supply yourself.

Retroshift sent over a pair for review and testing. I am going to put these on my Black Mountain Cycles "Monster Cross" bike and give them a go. I have been surprised by the amount of interest these have generated in just a weeks time with folks asking me specific questions about these. I'll get them mounted and tried out very soon and hopefully be able to answer all your questions then.

These will definitely get the full on test when I race them at CIRREM in a couple of weeks. That will likely be a messy, gritty 65 miles of tough gravel grinding. Looking at the forecast, it should be fairly warm and dry, but the frost in the ground may provide just the messy conditions these shifters were made to be best in. Stay tuned......

Well, you know the rest of that saying. In T.I.V8, this will include an Oakley Gearbox watch. This is a pretty fantastic award to whomever manages to finish T.I.V8 first.

So, why a watch? Good question! When Rob Versteegh, the Oakley contact I have, called me up about this, he thought doing something unique was in order. Some may remember that we have had Oakley sponsor us with eyewear in the past. But Rob reasoned that most folks coming to this event would likely be good with whatever eyewear they were using.

So, since Trans Iowa has time limits, and doing whatever you do out there during a Trans Iowa is affected by your use of time in a efficient manner, Rob suggested that a timepiece would maybe be a significant reminder to the winner that Trans Iowa was partly a challenge in time use. I thought it was a great idea.

That isn't all. The plan is to have the timepiece made even more unique with some custom engraved message. We'll have to determine what that might be. Any suggestions out there?

Speeding Up: My schedule of events is heating up now going from Winter into Spring. I mentioned CIRREM above, but before that, (only a week before that!), I go to do the annual ritual that is Frostbike. This will once again include the trek over to Northfield, Minnesota's Mike's Bikes. That should be another epic late winter shindig for sure.

The next gig, CIRREM will be a metric gravel grinder, then in about two weeks time after that, I go back to El Paso, Texas, where I have some unfinished business with a certain rocky trail to attend to there. Once I'm back from that, I have a super-top secret double check on the Trans Iowa V8 course. Then about a week or so later, I go to the Renegade Gents Race. Final prep for Trans Iowa will entail most of the rest of the month of April.

Then it'll be summer before I know it! Well, time's a wastin', better get my bags packed and my ducks in a row!

Retroshift is a great idea since we have a whole bin of very expensive shifters that are broken.Ari

engraving on the watch, "time was on your side"!

Have a great weekend, buddy!