The Business Of 29"ers

For many years, I used to see the following question pop up, or a variation of it: "I wonder what percentage of the market 29"ers have?" The folks that were asking were often trying to leverage their enthusiasm for 29"ers into some sort of "solid evidence" that 26"ers were dying off and this should show the manufacturers that they needed to start making more 29"er forks, tires, rims, and frames.

It wasn't a question that could be answered at all for many years. The industry sales statistics for mountain bikes didn't reflect a category for wheel size. Why would they? All "mountain bikes" were 26"ers, right? These big wheelers weren't going to amount to much anyway.

That is until Fisher Bikes, who doggedly stuck to their guns despite almost loosing 29"ers to Trek's inner hatchet men, were starting, in 2005, to see 29"ers make inroads on their 26"er product. Slowly but surely, others took notice. More companies were making token 29"er efforts, and they were higher priced, due to the small supply of 29"er specific parts, and specific frames.

But it didn't seem to matter. Customers came and bought the things, and within three years, it was evident that 29"ers weren't going away. Specialized and Giant finally caved in, and then it was on. Since 2009, 29"ers have been the hottest bicycle category next to road bikes, and in the mountain bike category, the 29"er was the only growth area. And you know what? Even with more numbers, the "premium" prices never went away. Didn't have to since demand was often out-stripping supplies.

Now it seems that the industry thought to track 29"er sales. Ya know what? They are still growing as a category, but now it seems that the forecast is for a leveling off. All this despite a slower economy, and all this despite a generally shrinking, or at best, staying even,  mountain bike category.Plus, those bigger prices will likely fade away with the leveling off of demand.

This all was brought to light recently by "Bicycle Retailer and Industry News", in whose latest issue is laid out the skinny on the sales figures in the industry. A few things stand out to me now.

In hard tails and to some degree, full suspension bikes, 29"ers have carved out a huge piece of the pie formerly owned by 26"ers. Interestingly, only full rigid 26"ers showed any increases, but keep in mind, these could be commuter/urban bikes that have more mountain bike-ish leanings. Who knows. These categories and reported numbers can only really be seen as "guidelines", not "hard and fast rules", after all. That said, you can draw some conclusions in trends. Obviously, 26"er mountain bikes as we once knew them are fast becoming an anomaly in the market place. The 29"er rules here. 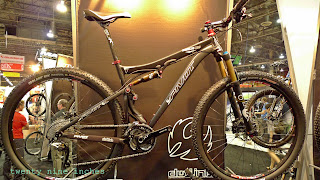 Where there is a line now is where "Trail" full suspension stops and "All Mountain" starts. Sure, you can find some examples where the 29"er lives and breathes in the All Mountain category, but if we're honest with ourselves, those examples are few and far between right now. The industry is setting up what they think will be the next "29"er-like" surge in mountain bike sales, and that is with the 650B bikes. They aren't here yet, but the category they slot into is sagging in sales. The big travel, all mountain type rigs with 650B wheels are seen as "that bike" which the industry is pinning its hopes on for more growth.

The industry as a whole has pretty much decided for you that 29 inch wheels have too many issues to get around to make a true all mountain bike with 5-7 inches of travel. The front ends would get too high, the tires, (if they existed), would be too heavy, and the way the geometry of big travel 29"ers would lay out isn't conducive to good handling. In other words, you folks out there that have been pining away for "shorter chain stays and slacker angled long travel 29"er bikes" will get your answer. It is 650B.

Oh yeah, and I think this is why the 29"er Maxxis Minion, shown at Interbike, hasn't materialized yet. They aren't going to make many of those, because Maxxis is probably getting hammered to do a 650B Minion, and Kirk Pacenti just announced a 2.4"er 650B tire which is set to be on these bigger travel 650B bikes. The industry wants 29"er growth in the AM market like they have gotten in the XC/Trail categories, and 650B is their "savior", by the looks of it.

The final thing that stands out to me from the article is the category of full rigid 29"ers has shrunken. I find that a bit funny, since at one time, that was all you could get for 29"ers. Now it seems that with the advent of the ultimate suspension technologies being applied to 29"ers, folks see no appeal in the fully rigid ride, or at least companies spec'ing bikes don't have to push those rigs any more. Probably the latter.
Posted by Guitar Ted at 1:30 AM

Good readings Ted. I think the trend towards 100mm travel adj frames is what is killing the full rigid bikes. If you want the same handling in steering and want the correct bb height you shouldn't really slap on a 468mm fork when it's designed around 485mm. Who makes great 485mm rigid forks? Syncros, Ritchey? All super stiff, too stiff for my liking. That's my two cents....

Good story... Another factor I think that's currently challenging rigid 29"er sales is simple market saturation. I mean, once you've got your rigid 29" singlespeed, how many people are going to see fit to replace it on a yearly, or even semi-annual basis. Unlike the perceived need to keep up with current suspension technology, rigid bikes aren't perceived to be advancing at as fast a rate, I suspect. You just buy right from the gun and ride happy... Or at least that's what a lot of riders do.

And I feel better about keeping a rigid frame around year-after-year than I do any FS frame. There are no pivot wear issues to deal with, and frames generally last longer when they're built from stacked triangles... I swear it's true based on my direct experience, even though I did just crack a rigid frame. It had five hard seasons of riding on it, so its time had come.

Agreed on the fully rigid observations that MG made. Also it seems like fully rigid 29"ers are now more a price play than anything. For really inexpensive you leave off the shifty bits, toss on a steel fork and you've got a decent entry level 29"er.

That said, I think that the there are enough inexpensive fork options available now that it makes getting big wheels, gears and some front end squish affordable for most people. That said, I still like my rigid steel SS Karate Monkey. :)