The third post about Frostbike? Yeah.......it was a fun weekend! This will be more of a photo-blog- commentary kind of post. Hold on! Here we go.... 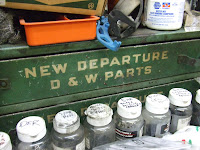 Mike's Bikes: Ya know, every time I go to this place I uncover some old bit or two that kind of blows me away. Take this New Departure parts box, as an example. It reminds you how long a history cycling has and how far it has come. By the way, New Departure was a hub manufacturer and made some pretty nice coaster brake hubs 50 years ago and more. Some of them are now collector's items.

I think I've actually overhauled one of these old hubs I mention here. I believe it was one with all the little clutch-like plates in it. Pretty cool little piece of design right there, and not all that easy to overhaul, but I got it done.

I'll always be grateful for being in the cycling business and for all the folks and opportunities I have been given along the way. Things like being able to go to Mike's Bikes. Thanks guys! 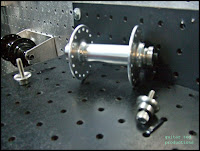 Here's a really bad picture of Surly's "Ultra New Hub". The newest generation of Surly hubs, which will be offered in many configurations like the old, "New Hubs", have only changed in that now one axle set up takes you from bolt on to quick release. More efficiency! The "Ultra New Hubs" will come with these Allen bolts and large washers to help with wheel retention, but if you'd rather, you can also pull the Allen bolts and slip in a skewer.

These are available now and in black or silver only. I own two sets of Surly hubs and they are solid product. The addition of the Allen bolts is a good change, I think. 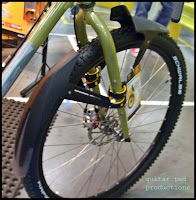 I saw these fenders and I just had to sort of shake my head. Every show seems to have what I call "what is and what should never be", partly because Led Zeppelin is awesome, but more so because well, the term just fits things like these fenders. they "are", but they "never should have been".

It is things like this, or the funky bio-mechanical contraptions you see in the halls at Interbike, that make you wince and laugh all at the same time. Someone thought it was a good enough idea to invest a lot of time and money into the idea. How ironic when you see how ludicrous some of these ideas come off to most folks that witness them.

In fact, I instinctively knew something wasn't really right with these, but didn't actually figure it out until I was at home looking at the image closer. Yep! That's not even close to being a truly workable front fender as it sits right there. Weird! Oh well.....I'm sure someone thinks it is awesome and that I don't know anything about clip on fenders. 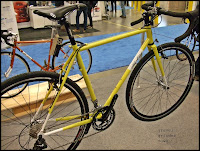 A geared Nature Boy? Nope- but a "Macho Man"! All City had this unveiled shortly before I arrived on the scene at the booth. It is basically a "geared Nature Boy", but they gave it a new model name. So- same great geometry, same tire clearances, just geared.

This could be a pretty decent gravel grinder if you don't mind the smaller tires. (Well- small is a relative term here) I have heard Nature Boy rigs  are nice, so I suspect this will be also.

If ya gotta have the bigger tires, then the soon-to-become-available Space Horse will fill that bill. (Was there a professional wrestling connection with "Space Horse"? I must have missed that one.) Space Horse bikes are still scheduled to land next month. 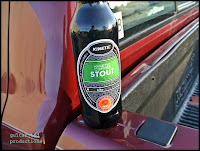 Beer. QBP had some specially brewed stuff that you could grab if you talked with "certain vendors" in a kind of beer quest, treasure hunt deal where you had to show that you spoke with these vendors to get one bottle of brew.

I spoke with a lot of vendors, but not knowing if I had spoken with all the "correct ones" I didn't know if I qualified to get a bottle or not. I decided to make an "executive decision" and I grabbed one anyway. This was at the end of Saturday, and I was one of the last folks to get "swept out the door" by security, and they were basically handing these out to anybody and everybody, so don't get yer panties in a bunch here! It was all legit.

Besides, like a moron I took my bottle with me in Curtis' car on the way to eat at a Vietnamese restaurant, (which- by the way, was spectacularly great), and when I was obliged to swap out cars, I left it behind with Curtis.

judging by the big gap in the middle and the large diameter clamps, that fender looks like it was meant for a suspension fork. why they chose to demo it on a Fargo, a bike with fender eyelets, is anyone's guess.